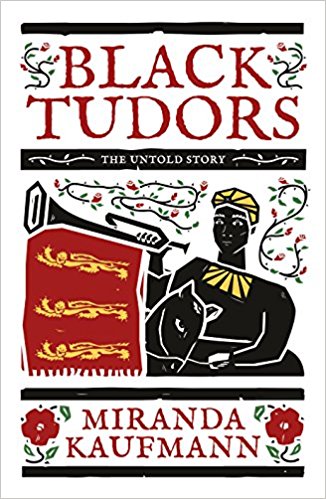 I have always enjoyed reading about the Tudor time period and learning new things about it. There have been some titles that have caught my eye and I have wanted to read for quite some time. This is one such books: “Black Tudors: The Untold Story” by Miranda Kaufmann.

Now when I first thought about the title, I was a little shocked. For me growing up in the United States, I have always believed that Africans in England would have been treated like Africans in Spain and the American colonies, as slaves. This, however, is not the case. Miranda Kaufmann reveals a new part of the African story in the time of colonization.

Kaufmann divides the story of Africans in England into ten chapters telling the stories of ten different individuals: John Blanke the trumpeter, Jacques Francis the salvage diver, Diego the circumnavigator, Edward Swarthye the Porter, Reasonable Blackman the Silk Weaver, Mary Fillis a Moroccan convert, Dederi Jaquoah a prince of River Cestos, John Anthony a Mariner from Dover, Anne Cobbie a prostitute, and Cattelena of Almondsbury an independent woman farmer. By showing each of these individuals’ stories, Kaufmann is painting a picture of a larger story of these men and women who came to England from their native Africa. Some came to better themselves, others had no choice in the matter. Some were servants for wealthy families and others were independent men and women who used their skills to make a better life for their families and themselves.

I thoroughly enjoyed learning about these men and women. Kaufmann has a way of writing that is both educational and enjoyable. For those who are unaware of what some of these positions were like in the time of the Tudors, Kaufmann breaks it down in a way that is understandable. Kaufmann explains:

“The history of the Black Tudors is an aspect of British history that deserves a wider audience. It shows that when we ask new questions of the past we get new, and often surprising, answers. We thought we knew Tudor England, but this book reveals a different country, where an African could earn a living, marry and have a family, testify in a court of law, or even whip an Englishman with impunity.”

If you want to learn about a new aspect of Tudor society, I highly recommend you read this book. These stories are just as important as the monarchs who capture our imagination on the time. These are the stories of average people trying to survive in the Tudor period.