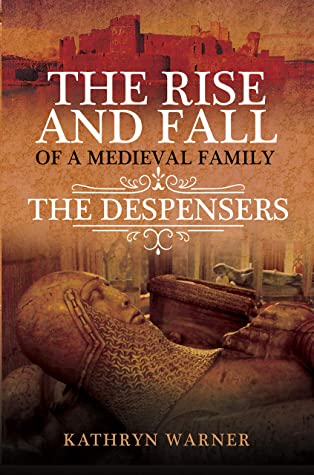 In the times of medieval kings, the power of the crown was dependent on the support that they maintained with noble families. One of the most notorious noble families in England was the baronial family known as the Despensers. Between the 13th and the 15th centuries, the Despensers were at the heart of royal politics and some of the biggest power plays during the reign of the Plantagenets. We know about the few members who truly made waves during this time, especially Hugh Despenser the Elder and Hugh Despenser the Younger, but this family’s story is much more than a few members. In Kathryn Warner’s latest book, “The Rise and Fall of a Medieval Family: The Despensers”, she takes on the challenge of explaining the entire family story of this infamous baron clan.

I would like to thank Pen and Sword Books and Net Galley for sending me a copy of this book. I have enjoyed Kathryn Warner’s writing style in the past and when I heard about this book, I was intrigued. I will be honest and say that I only knew about Hugh the Elder and Hugh the Younger when they were mentioned in other history books that I had read in the past. I was excited to learn more about this family.

To understand this book, it should be noted that this is unlike any other modern medieval history book. It is a bit different than what Kathryn Warner has written in the past. In truth, this book feels like a modern-day chronicle of the Despenser family. Warner begins with the reign of King Henry III in 1265 with the execution of the Despenser’s patriarch, Hugh the justiciar, and concludes with Isabella Despenser, who was the grandmother of Anne Neville, the wife of King Richard III. Warner includes the more scandalous tales of love and betrayal that encapsulate the fascination that historians have had with this family for centuries.

What was compelling to me about this book is the stories of those who were in the background of the more sensationalized figures. The tales of triumph and sorrow that the family had to endure are remarkable. For the family to survive, they needed to make waves in the medieval marriage market, which they did spectacularly. It is these marriages and their impacts that Warner focuses heavily on to show that even in disgrace, the Despensers continued to rise from the ashes.

If I did have a problem with this book, there were points where it was a tad dry to read. This book is very academic and is directed towards those who know the history of the Despensers. Warner takes her readers on a deeper dive into this infamous family. You can tell from Warner’s dedication to this task that she truly enjoyed studying about the Despensers. As someone who was not familiar with this family and its numerous family members named “Hugh”, I found myself going back to try and figure out who was who.

If you want to tackle this book, my advice would be to take your time to truly understand this complex family. This book is exceptionally well researched and a true chronological treat for those who love to dive into the intricacies of medieval families. If this sounds like you, check out, “The Rise and Fall of a Medieval Family: The Despensers” by Kathryn Warner.