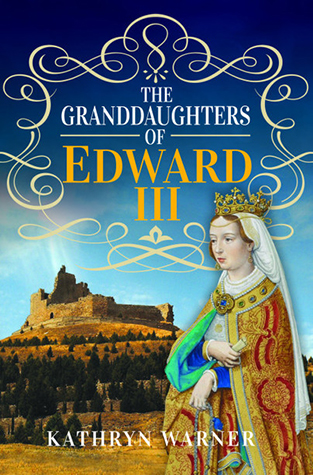 When we think about the legacy of Edward III, we often think about a warrior king who became king after his father, Edward II’s disastrous fall from grace. We know about his sons that he had with his beloved wife, Philippa of Hainault: Edward the Black Prince, Lionel of Antwerp, Duke of Clarence, John of Gaunt 1st Duke of Lancaster, Edmund of Langley, 1st Duke of York, and Thomas of Woodstock, Duke of Gloucester. Famously, we get the 15th-century conflict known as the Wars of the Roses through the descendants of Edward III. However, the male descendants only tell half the story of Edward III and Philippa of Hainault’s legacy in England and throughout Europe. In her latest book, “The Granddaughters of Edward III,” Kathryn Warner examines the lives of Edward III’s female descendants to better appreciate the strength of this group of branches of the Plantagenet family tree.

Thank you, Pen and Sword Books and Net Galley, for sending me a copy of this book. I am always looking for more books about the Plantagenets, and I know a bit about Edward III’s sons but not much about his granddaughters.

These women were not just great ladies in England, but in the case of Philippa of Lancaster and Catalina of Lancaster, they were Queens of Portugal and Castile, respectively. Philippa of Lancaster ushered in the Illustrious Generation in the history of the royal family of Portugal. Catalina married her mother’s mortal enemy to create a stronger connection between England and Castile. Back in England, the remaining granddaughters had to deal with rebellions against King Henry IV, resulting in husbands and sons being beheaded. One had married her former brother-in-law when her husband died, and another had an affair with the king’s half-brother, resulting in the birth of an illegitimate daughter. A granddaughter had her marriage annulled when her husband decided to marry a lady-in-waiting. One began her life as an illegitimate child and would end up being the grandmother to two Kings of England.

Warner has been able to take the stories of these eleven women who shared a grandfather and show how their tales transformed England, Castile, and Portugal forever. The amount of love and attention she dedicated to this book is admirable. I appreciate how Warner could give readers who only understood the English side of these tales a better understanding of the political situations in Castile and Portugal. If you want a book with brand new medieval heroines with a connection to the Plantagenet dynasty, I highly recommend you read “The Granddaughters of Edward III” by Kathryn Warner. 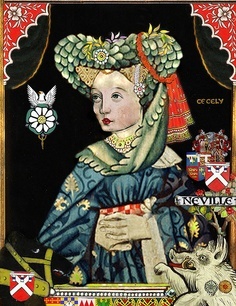 Also known as “the Rose of Raby” and “Proud Cis”. (Born May 3, 1415-Died May 31, 1495). Daughter of Ralph Neville, 1st Earl of Westmorland and Joan Beaufort. Married to Richard Plantagenet 3rd Duke of York. Mother of Anne, Duchess of Exeter, Edward IV, King of England, Edmund, Earl of Rutland, Elizabeth, Duchess of Suffolk, Margaret, Duchess of Burgundy, George, 1st Duke of Clarence and Richard III, King of England.
Cecily Neville was the mother of two kings of England, Edward IV and Richard III. She was known for her piety and her pride.

Cecily Neville was the daughter of Ralph Neville, 1st Earl of Westmorland and Joan Beaufort. Her paternal grandparents were John Neville, 3rd Baron Neville de Raby, and Maud Percy, daughter of Henry de Percy, 2nd Baron Percy. Her maternal grandparents were John of Gaunt, 1st Duke of Lancaster, and his third wife Katherine Swynford, thus making her a great granddaughter of King Edward III on her mother’s side of the family. She was born on May 3, 1415 at Raby Castle in Durham thus gaining the nickname “the Rose of Raby”. Her father Ralph Neville was granted the wardship of a young Richard Plantagenet, 3rd Duke of York and in 1424, she was betrothed to Richard. When Ralph Neville died in 1425, his widow Joan Beaufort was able to maintain the wardship of Richard Plantagenet. In October 1429, Richard and Cecily were married; their first child Anne was not born until August 1439.

Richard was made king’s lieutenant and governor general of France in 1441; Cecily and Anne moved to Rouen to be with him. They had a son Henry but he would die soon after he was born. On April 28, 1442, their son the future Edward IV was born in Rouen. He was baptized shortly afterward, which caused both his cousin Richard Neville, Earl of Warwick and his own brother George Duke of Clarence to question if he was actually the son of Richard Plantagenet. These claims were dismissed as attempts to remove Edward from the throne. Richard Plantagenet always acknowledged Edward as his own son. In total, Cecily and Richard would have 13 children including Edward IV, George Duke of Clarence and Richard III.

Richard had an enemy at court and that was Edmund Beaufort, 2nd Duke of Somerset, a cousin of Cecily Neville. Richard did not like how close Somerset was to the king and to Margaret of Anjou. In 1454, Henry VI had a mental breakdown and it was Richard, not Somerset, who was made Lord Protector and Richard threw Somerset in prison. Richard was removed from the post in 1455, all of his reforms were changed and Somerset was released from prison. This infuriated Richard and so he decided to march against Somerset at the First Battle of St. Albans where Somerset was killed. During this time, Cecily and her children were living in Ludlow Castle, even when Richard fled to Ireland and the European continent. In November 1459, Cecily travelled to London to plead for her husband’s cause to Parliament. Richard lost all of his titles but Cecily was able to get a grant of 600 pounds for her efforts in order to provide for her children.

1460 was a year of change for the York family. When the Yorkist army won at the Battle of Northampton in July 1460, Cecily moved her family to London where they stayed with the lawyer John Paston. Richard and his heirs were declared Henry VI’s successors in the Act of Accord, which made Cecily a queen-in-waiting. This pushed Edward of Westminster, Prince of Wales, out of the line of succession, which angered his mother Margaret of Anjou. Margaret led the Lancastrian army against the Yorkist army at the battle of Wakefield on December 30, 1460, where Richard Duke of York and his son Edmund Earl of Rutland were killed. Cecily sent her young sons George and Richard to the court of Philip II duke of Burgundy for their protection, making Philip an ally of the Yorkist cause.

Cecily’s son Edward took up the Yorkist cause with the help of Richard Neville, Earl of Warwick. Edward was able to defeat the Lancastrians and become king, making Cecily mother of the king. In 1461, Cecily included the royal arms of England on her own coat of arms, which hinted that her husband was the rightful king of England. When Edward married Elizabeth Woodville in 1464, he built a new queen’s quarter for Elizabeth and let Cecily stay in the old queen’s quarters. When Warwick and Cecily’s son George rebelled in 1469 against Edward, Cecily worked hard to get both sides to reconcile, which briefly happened. Warwick and George went to France and joined the Lancastrian cause. In 1470, the Lancastrian cause under Warwick overthrew Edward and placed Henry VI back on the throne. It only lasted for six months and on April 14, 1471, Edward came back to the throne and Warwick was killed.

Edward never really trusted George again and on February 18, 1478, George was executed for treason at the Tower of London. This must have been a difficult moment for Cecily as one son had another executed for treason. Edward IV would die suddenly on April 9, 1483, leaving his young son Edward V as the next king of England. He was 13 and his younger brother Richard was 10 years old. Richard, Cecily’s youngest son and the boys’ uncle, became their Lord Protector. He had the boys placed in the Tower and they were never seen again. There was an enquiry into Edward’s marriage to Elizabeth Woodville and they found that it was invalid and an Act of Parliament called the Titulus Regius declared that the Princes in the Tower were illegitimate and that paved the way for Richard to become Richard III on July 6, 1483. Cecily got along rather well with Richard’s wife Anne Neville and would often discuss religious matters with her, until Anne died.

On August 22, 1485, Richard III was killed at the Battle of Bosworth Field and Henry Tudor became Henry Tudor. Cecily’s husband and all four of her sons were dead by 1485, Edward IV was the only one by natural causes. On January 18, 1486, Cecily’s granddaughter Elizabeth of York married Henry VII and help bring forth the Tudor Dynasty. At this time, Cecily devoted her life to religious duties and she gain a reputation for her piety. Cecily Neville never married again and on May 31,1495, she died. She was buried in the tomb with her husband Richard and their son Edmund at the Church of St Mary and All Saints, Fotheringhay, Northamptonshire.