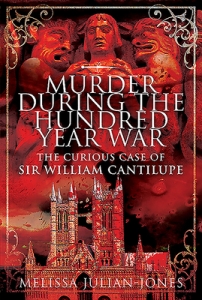 In 1375, the body of Sir William Cantilupe was found murdered in a field. He was stabbed multiple times, yet it looked like he was moved as his clothing had no marks on it. The initial investigation pointed to William Cantilupe’s immediate family and his household staff who appeared dissatisfied with how he ran his household. This particular case has been an area of fascination for medieval historians for centuries as it explores different aspects of life during the Hundred Years War. Some of these areas include domestic violence, social norms, law and order, and the punishment for crimes like murder. Melissa Julian-Jones explores every aspect of this case while combining contemporary sources to give readers a new approach to this murder in her book, “Murder During the Hundred Year War: The Curious Case of Sir William Cantilupe”.

I would like to thank Pen and Sword Books and NetGalley for sending me a copy of this book. I had never heard of this case, but after reading the Shardlake series, I was looking for another historical who done it. When I heard about this book, I thought I would give it a try.

Julian-Jones introduces her readers who may not be familiar with this case to the basic facts; when the sheriff and the coroner discovered Sir William Cantilupe’s body in a ditch in a field, which was not that uncommon for a medieval murder. At first, they assumed that it was a simple case of a highway robbery, which Julian-Jones does explore for a bit, but they quickly come to the conclusion that the murder occurred inside of his own household.

To explore the motives of those who might have killed William, which included his wife Maud and his household staff, Julian-Jones explores the family history of the Cantilupes and why people might have wanted to kill William. This part of the book was a bit difficult to read because she does not mince words when it comes to some of the graphic details of their lives, which includes elements of domestic violence. Sometimes when you do study history, you will confront things in history that will make you feel uncomfortable, but it is part of the learning experience to know that things in the past were not always black and white, there were a lot of grey areas.

Julian-Jones spends the bulk of her book exploring the lives of those who were considered the suspects of the murder. Since we don’t have much information about their particular lives because of their stations in life, Julian-Jones had to rely on similar cases from the same era to show what the motive might have been and what the punishment for the crimes was for the different stations of life. This was quite fascinating as we see how a medieval historian who studied criminal accounts had to act like a detective to figure out what the truth might have been and who might have committed the murder.

Julian-Jones takes her readers on a medieval murder mystery ride that affected the nobility, rather than the nobility, which is rather unusual. This book will expand your knowledge about the medieval nobility, their households, and the criminal justice system of their time. This was truly a fascinating study into a centuries-old cold case mystery. If you want a good study into a medieval mystery, you should definitely check out, “Murder During the Hundred Year War: The Curious Case of Sir William Cantilupe” by Melissa Julian-Jones.