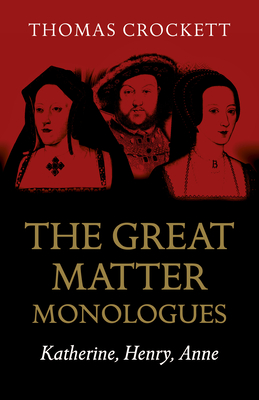 There have been certain events in Tudor history that have become as famous as those involved. None more so than the divorce between Henry VIII and Katherine of Aragon so Henry could marry his second wife, Anne Boleyn, also known as “The Great Matter”. We often study this time through the perspectives of the many historians and authors who have written about this topic. But, what if Katherine, Henry, and Anne had a chance to speak for themselves about the events of “The Great Matter”. Thomas Crockett decided to have the main figures of this famous divorce tell their tales in his latest work, “The Great Matter Monologues: Katherine, Henry, Anne”.

I would like to thank John Hunt Publishing for sending me a copy of this book. The premise of this particular play intrigued me so I wanted to read it, even though I haven’t read many plays or monologues before.

Unlike many narratives about “The Great Matter”, Crockett begins with Katherine finding out that Henry wants to divorce Katherine because she has not given her his desired son. It is a bit of a strange starting point since other narratives show the courting of Henry and Anne. Crockett’s monologues deal with Katherine, Henry, and Anne discussing the events that recently happened as well as flashbacks to easier times. As a reader, you can feel the emotional turmoil that each character is going through as the marriage of Henry and Katherine is ending and a new relationship begins.

While I did enjoy the emotional dialogues that Crockett shared to give the audience a sense of what Henry, Katherine, and Anne might have felt during this time, I did have a problem with the other pieces of dialogue. When the characters were remembering past conversations with relatively minor characters, it was hard for me to follow what was going on, but I think it might have been because I was not used to reading monologues.

The characters are each interesting in their own ways. Katherine mourns for her marriage and fights for Henry’s love, her daughter Mary, and for her crown. Henry wants what he wants and he doesn’t care who he steps on in order to get his way. The character that I really did not like in this series of monologues was the woman who was caught in the middle, Anne Boleyn. To me, she comes off as power-hungry and whining. It feels like Crockett did not like Anne Boleyn at all when he wrote this book.

Overall, I thought that this book was okay. There was nothing new about “The Great Matter”, but Crockett did bring to life the emotional struggles that Henry, Katherine, and Anne must have been going through. If you are not familiar with the divorce of Henry VIII and Katherine of Aragon then “The Great Matter Monologues: Katherine, Henry, Anne” by Thomas Crockett is a good book that gives you a different perspective of this historic event that changed England forever.