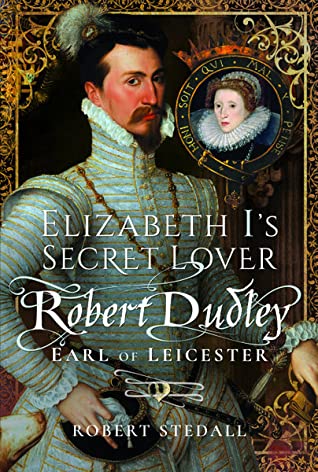 The last Tudor monarch, Queen Elizabeth I, was known for many things, but her main legacy is that she never chose to marry anyone. She was the infamous “Virgin Queen”. However, there were those around her who manage to capture her attention and her admiration for a time. The most famous of these men was Robert Dudley, Earl of Leicester. He was a massive supporter of the arts and the Protestant faith, gaining prestige and praise from his highly exalted monarch. Yet, his life and his relationship with his wives, his enemies, and Elizabeth I was full of dangers and numerous scandals. Who was this man who wooed the heart of the most eligible woman in all of 16th century Europe? Robert Stedall investigates the relationship between these two lovers destined to never marry each other in, “Elizabeth I’s Secret Lover: Robert Dudley, Earl of Leicester”.

I would like to thank Pen and Sword Books for sending me a copy of this book. I am always interested in learning new aspects about the reign of Elizabeth I and her love life. When I saw the cover, I was instantly drawn to it and I wanted to know more about Elizabeth and Robert.

Stedall begins his biography by exploring the reigns of Edward VI, Lady Jane Grey, and Mary I to show how the Dudleys came to power and how they fell out of power. I noticed that Stedall included Lady Jane Grey and Guildford Dudley in the family trees that he provided at the beginning of the book, but their death years are different, even though they both died in 1554 on the same day. I think that it was interesting to see how the fall of the Dudleys affected Robert and how it was truly through Elizabeth’s favor that they gained back their honor. This friendship between Elizabeth and Robert gradually developed into love, although it was quite taboo. Robert was Elizabeth’s Master of the Horse and he was already married to Amy Robsart. Even after Amy’s untimely death, Elizabeth and Robert could never be together as a couple because her council, especially Cecil, wanted her to marry a great European power to create a strong alliance, which was a reasonable request.

Sadly, Robert Dudley could not wait forever for Elizabeth, so he chose to marry again, this time to Lettice Knollys. To say Elizabeth was upset about this marriage would be an understatement. Even though she could never marry Robert, it did not mean she wanted another woman to marry him. Robert remained faithful to his queen as a military officer and a patron of the arts and building projects. It is impossible to discuss the Elizabethan Age without mentioning the contributions of Lord Robert Dudley.

I think Stedall has done his research very well. However, this book is a tad too dry for my taste. I was hoping to learn some new swoon-worthy facts about this notorious romance, but Stedall’s book was a bit too analytical for this to happen. It was a struggle for me to read this book as it took me a few weeks to finish it. With a title such as the one he provided, I was hoping for new romantic facts, but it fell flat for me.

Overall, I felt like this was a well-researched biography, but it fell flat on the delivery. I think if you are being introduced to the relationship of Elizabeth I and Robert Dudley, this is a decent introduction, but if you know the story, it might not be the best book to read. If you want to learn more about Robert Dudley and his influence in the Elizabethan court, check out, “Elizabeth I’s Secret Lover: Robert Dudley, Earl of Leicester” by Robert Stedall. 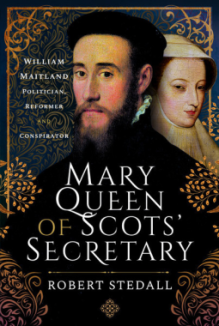 One of the most dynamic queens in 16th century Europe who spent most of her youth in a country that was not her homeland, but was fighting for the right to rule England. Her name was Mary Queen of Scots, the cousin of Queen Elizabeth I. Many know of her tragic tale, but there was a man who was behind the scenes trying to guide Scotland to a brighter future. He was not married to Mary Queen of Scots, but he was influential in her life and choosing who she might marry and who she would end up divorcing. He was a politician and a religious reformer whose decisions would alter history dramatically. His name was William Maitland and he served as Mary’s secretary. He is always mentioned as a footnote in history, until now. Robert Stedall’s latest biography, “Mary Queen of Scots’ Secretary: William Maitland- Politician, Reformer, and Conspirator”, explores the life and legacy of this rather extraordinary secretary.

I would like to thank Pen and Sword Books and Net Galley for sending me a copy of this book. When I saw this book, I was intrigued since I had never heard of William Maitland, except in footnotes in books about Mary Queen of Scots that I have read in the past. I wanted to know more about the man who knew Mary so well and helped her with such significant decisions in her life.

After Mary Queen of Scots’ first husband, Francis II of France passed away at a young age, she made the journey back to the country of her birth, Scotland, where she was introduced to William Maitland. As a Protestant reformer, he believed that the best thing for the country and the Scottish Reformation would be to break the Auld Alliance with France and to gain closer ties with England. Mary’s second husband, Lord Darnley, is less than agreeable to Maitland, so he and others help plot his murder. This decision led to Mary’s imprisonment and the succession of her son James as king.

Stedall’s whole premise revolves around the idea that Maitland helped plan Darnley’s murder. I do have a few problems with this book. First, for a biography that should revolve around Maitland, it felt like Maitland was more of a background character to Mary’s story. Second, the case that he lays out for Maitland being involved in the murder revolves around the validity of the infamous Casket Letters, which many believe are forgeries and have disappeared. It is hard to prove a case when the evidence in question may have been forgeries and are lost to history. Finally, I felt like Stedall’s writing style was a bit dry for my personal taste. I know that this was supposed to be academic in nature, with the focus on the political and religious nature of Maitland’s life, but it just fell flat to me.

Overall, I felt like this book was okay. It may have shown how the political and religious divides influenced the decisions of Mary Queen of Scots’ reign, but it needed a stronger focus on William Maitland. I feel like Stedall has a passion for this period of Scottish history and he has done his research, but he needed to rein it in a bit more. I think if you enjoy reading about Mary Queen of Scots, “Mary Queen of Scots’ Secretary: William Maitland- Politician, Reformer and Conspirator” by Robert Stedall might be a book you should check out.