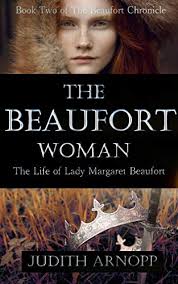 A young woman separated from her only son as a war divides the nation that she dearly loves. The struggle between York and Lancaster, the Wars of the Roses, grows in intensity and the only hope for the Lancastrians is the son of Margaret Beaufort, Henry Tudor. To keep him safe, Margaret must allow him to go into hiding as she adapts to the court of Edward IV and his wife Elizabeth Woodville. Margaret’s journey through love, death, and court intrigue continues in Judith Arnopp’s second book in her Beaufort Chronicle, “The Beaufort Woman”.

As someone who is a fan of Margaret Beaufort and her life story, I have been finding myself enjoying The Beaufort Chronicle series by Judith Arnopp. Since I read the first book, “The Beaufort Bride”, I knew that I wanted to continue Margaret’s adventure.

We join Margaret as she is enjoying her third marriage to Sir Henry Stafford. This was probably her happiest and longest marriage, yet it is not elaborated on much. I think the way that Arnopp describes this relationship is thoughtful, considerate, and full of love. Obviously, like most relationships, there were hardships between Henry and Margaret, but Henry knew that what Margaret was doing was for her son. Life looks like it is going Margaret’s way, but then her husband Henry dies and she must make a difficult choice.

Margaret decides to choose her fourth and final husband, Thomas Stanley. Unlike her marriage to Henry, Margaret never really loved Thomas. Thomas was more of a tool to get her into the court of Edward IV to make sure her beloved son Henry could come home. When I have read Margaret’s biographies in the past, I have always wondered what life must have been like for her while she was in the court of her former enemies. To see her interacting with Elizabeth Woodville and her children was a delight and makes you wonder what life might have been like for Margaret if she had more children.

With the sudden death of King Edward IV in 1483 and the mysterious affair with his sons, Edward’s brother becomes King Richard III and fortune’s wheel takes another turn for Margaret. She must take dangerous steps to make sure that her beloved son can return home, even if it means risking her own. The amount of courage and patience that Margaret had was nothing short of extraordinary. You cannot help but admire Arnopp’s Margaret Beaufort.

I found this a thrilling second book to this stunning trilogy. Arnopp made Margaret Beaufort and her family even more relatable. I felt sympathy for Margaret as she had to make some extremely difficult decisions. I did know what was going to happen, but I still wanted to continue reading just to see how Arnopp would interpret the events in Margaret’s life. If you have read “The Beaufort Bride” and you want to continue the journey, you need to read “The Beaufort Woman” by Judith Arnopp.

A weak king caught in the middle of court drama, each side fighting for the control of the crown and the right to have their opinions heard. England is on the brink of civil war with a young heiress struggling to find where she belongs and to survive. The young heiress is Margaret Beaufort, the mother of Henry Tudor (the future of Henry VII) and a survivor of the Wars of the Roses. Her story has been told in many different ways, but the story of her early years has rarely been told, until now. Judith Arnopp has decided to tell Margaret’s story from her perspective in her novel, “The Beaufort Bride: Book One of The Beaufort Chronicle”.

Margaret is one of my favorite people from the Wars of the Roses to study. I have read a few biographies about Margaret Beaufort and a few historical fiction novels that feature her as a minor character. However, I have never read a historical fiction series about her before, so this one caught my eye. This was the first book that I have read written by Judith Arnopp and I thoroughly enjoyed it.

Arnopp begins her novel with Margaret finding out that her father committed suicide and that she is a wealthy heiress at a young age. She is living with her mother and her step-siblings. It is interesting to see the family interactions because Margaret’s step-siblings are rarely mentioned. To make sure Margaret is taken care of, her mother puts her on the marriage market at a very young age, which was not that unusual during this time. Margaret’s first husband was John de la Pole, a debatable issue that many historians view as merely an engagement and not a marriage, but it was quickly annulled when John’s father was declared a traitor and was massacred on a ship trying to escape England. I enjoyed seeing Margaret and John interacting with one another. They act more like friends than husband and wife, which makes you wonder what it might if they stayed married.

The bulk of this novel revolves around Margaret’s relationship with her second husband, Edmund Tudor, the step-brother of King Henry VI and a man who was twice her age. It is a relationship that we don’t know much about, but Arnopp shows how gradual and loving it might have been. Although Margaret was not thrilled with the arrangement at first, she did being to develop feelings for her new husband. It was during this time that Margaret finds her inner strength and she becomes pregnant with her only child, a son. Life, unfortunately, takes a turn for the worse for Margaret when Edmund tragically dies and she must face an excruciating labor experience to bring Henry into the world two months later. Margaret’s trauma during Henry’s birth means that she could never have any more children, making Henry the most precious person in her life.

I loved this novel. I honestly could not stop reading it. Arnopp makes Margaret’s early life so believable and heartbreaking. I love Margaret even more after reading this novel and I cannot wait to read the rest of this series. If you want a marvelous novel about Margaret Beaufort’s early life, I highly recommend you read, “The Beaufort Bride: Book One of The Beaufort Chronicle” by Judith Arnopp.