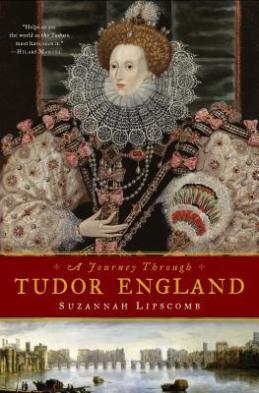 In history, we tend to focus on the stories of the men and women who shaped the era. This is obviously important, but the locations where the events of the past happened are equally as important. Sadly, many of the buildings that the men and women from the past knew no longer exist. However, there are a few, especially from the Tudor period, that we can still visit. Suzannah Lipscomb explored over 50 of these remarkable buildings and decided to tell their tales in her book, “A Journey Through Tudor England”.

This book is quite delightful and simple to understand. As someone who has never been to England, I have always wondered what these places must be like to be there in person. Obviously, I have read different descriptions of these places in biographies and historical fiction novels, but the amounts of details that Lipscomb includes is truly a breath of fresh air.

Lipscomb breaks down her book into sections that correspond with where the locations are in England, making it easier to plan a trip for any Tudor fan. Naturally, she does discuss the castles, palaces, theatres, and abbeys that we are all familiar with like Hever Castle, the Tower of London and Fountains Abbey. But, Lipscomb does include locations that fans of the Tudor dynasty may not be familiar with, places like Kett’s Oak or The Vyne.

Although these places by themselves can be interesting, it is truly their connections with the historical figures and important events that define their significance. This is where Lipscomb’s book truly shines. The stories that Lipscomb includes in this book are so engaging and gives a new perspective to the Tudor dynasty. It is not just stories of triumphs and failures by those who we are familiar with, like Henry VIII, Anne Boleyn, Elizabeth I, and Mary Queen of Scots, but men and women that we may be being introduced to for the first time. Along the way, Lipscomb includes little facts about everyday Tudor lives to give the readers an idea of what life might have been like back then.

Like any good travel guide, Lipscomb includes a list of the locations, their hours and how to get in contact with them. My only real issue with this book is that I wanted to see pictures of these locations. As someone who doesn’t live in England, it would have made the reading experience a bit better and I could visualize the places Lipscomb was describing and would make me want to visit the places in this book even more.

As the first travel guide that I have ever read and reviewed, I found this book really enjoyable. It was light, engaging, and extremely informative. If I ever travel to England, I will bring this along with me and visit the sites in this book. If you want a well-written travel guide to Tudor sites, I highly recommend you read, “A Journey Through Tudor England” by Suzannah Lipscomb. 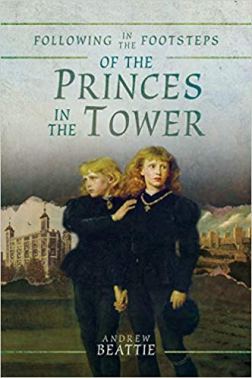 When one thinks about the Wars of the Roses, we often think about the adults who fought against each other. However, there were also children who were stuck in the middle of the conflict. Two of the most famous children of this time were Edward V and Richard of Shrewsbury, Duke of York, the sons of Edward IV and Elizabeth Woodville. Today, we refer to these brothers as “the Princes in the Tower”. The disappearance of these two boys has sparked so much debate over the past five centuries as to who killed them or if they did indeed escape the tower, yet we have no way to know what happened to them. What we do have is the physical locations that were part of the young princes’ lives. Instead of diving into the quagmire that is the mystery of the princes’ lives, Andrew Beattie takes a different approach in his book, “Following in the Footsteps of the Princes in the Tower.”

I would like to thank Pen and Sword Books for sending me a copy of this book. The Princes in the Tower has been a topic that has fascinated me for a few years now.

In his introduction, Andrew Beattie lays out his intentions for this book, which is rather unique when it comes to this particular field of study:

A survey and discussion of how novelists and playwrights have depicted the lives of the two princes, and have told the story of their imagined fates, is one aim of this book. Moreover, though, this book seeks to look at the princes’ story in a way that has not been considered before: through the places associated with them during their lives. They were the sons of a reigning monarch and one of them became a monarch himself. Not surprisingly they grew up in castles and palaces and their lives are commemorated in a number of churches…. Whilst this book does not seek to shed any new or radical light on the princes’ fate, it is hoped that through accounts of the places associated with them- from London and Kent to Shropshire, the English Midlands, and modern-day Belgium- a greater understanding of their lives and legacy can be gleaned. (Beattie, x).

Since Beattie has decided to break his book into two elements, I will be breaking his book down in a similar way. First, I will be focusing on the main part of Beattie’s book, the places associated with the princes, and then I will be looking at the discussion of how the princes were portrayed in historical fiction and plays.

I think Beattie did a great job exploring the places associated with the princes, from their birth to the Tower and beyond. By explaining the history behind the places before and after the princes stayed, the reader can see the kind of footprint they left behind. It reads like a historical travel guide with pictures of the places to give the reader an idea of the locations as they are now. I also enjoyed how Beattie explores the scientific evidence and the stories of different sets of bones and graves associated with the princes.  It is a unique way to view history, one that helps balance out the facts of a history book with physical locations.

The big problem I had with Beattie’s book was with his inclusion of how the princes have been portrayed in historical fiction,  plays, and movies. Honestly, I feel like it took away from the whole book. It was distracting for me to read these parts. I think that if Beattie had separated the fictional portrayals from the information about the places, I might have liked the book a bit better, but this is just my opinion.

Overall, I thought “Following in the Footsteps of the Princes in the Tower” by Andrew Beattie was a decent read. Beattie does have an easy to understand writing style, but as he stated before, his book does not contain ground-breaking research. If you are interested in exploring the places associated with the Princes in the Tower, this book is a great place to start.