In history, we tend to focus on those who were crowned kings and queens of different nations. Their strengths and their weaknesses. Their accessions and the legacies that they left behind. With every story of someone who triumphed in gaining the throne, there are tales of those who were close to the throne but were never able to achieve the ultimate goal of ruling a nation. These “lost heirs” fall into two categories; either their names live on in infamy or they are thrown into the dust of the past. Who were these men and women and why did they lose their chances to sit on the throne? These questions are explored in J.F. Andrews’ book, “Lost Heirs of the Medieval Crown: The Kings and Queens Who Never Were”.

I would like to thank Pen and Sword Books for sending me a copy of this book. The title was what drew me into reading it, since these figures rarely get attention, let alone have an entire book dedicated to their lives. I have never read a book by J.F. Andrews, which is not surprising since it is a pseudonym for a historian who has a Ph.D. in Medieval Studies. I want to know who the historian really is since, in the historical field, it is a rarity to use a pseudonym, but that may just be my own personal curiosity.

Andrews’ book begins with the death of William the Conqueror and extends through the reign of Henry VII. With over 500 years of Medieval English history (with the main focus being on the Plantagenet family), it can get a bit confusing to figure out how everyone is connected, but Andrews provides a simplified family tree at the beginning of each chapter to help the reader out. It is a brilliant move and it also shows how vast Andrews’ knowledge of Medieval England’s royal families truly is.

When we tend to think about those would inherit the throne, we tend to think about the firstborn sons, like Robert Curthose, Henry the Young King, Edward the Black Prince, and Edward V. However, as the reader will learn, they were not the only ones who had a chance at the throne. Men, like Richard duke of York, believed that their claim to the throne was stronger than the person who was king. There were also those who were seen as a threat to the king who sat on the throne because of their lineage. They were all legitimate, as Andrews chose not to include those who were illegitimate.

Another factor that united all of these stories was that they all ended in tragedy. Some died from medical conditions at a young age. Others were either imprisoned, never to be heard from again. Yet the majority died in battle, either fighting for or against the king who sat on the throne at the time. Most of them, except for Richard duke of York, died relatively young, which makes us as readers wonder what their reigns might have been like if they were able to be crowned king or queen respectfully.

Overall, I found this book rather informative. Andrews’ writing is enjoyable and is easy to follow. This book really makes you wonder what if these lost heirs became kings and queens, how different history would have been. If you want to read an intriguing book about some mysterious men and women in history, I highly recommend you read, “Lost Heirs of the Medieval Crown: The Kings and Queens Who Never Were” by J.F. Andrews. 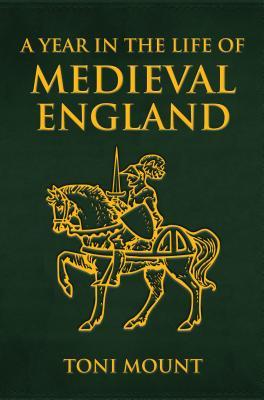 The medieval era was one of the most turbulent times in all of English history, full of family feuds, gruesome wars, and so many twists and turns. We tend to focus on the big stories, but, it was not just about the royalty and the nobility, there were also lower classes whose lives went on in the background. What was everyday life like for both the rich and the poor? What ceremonies and recipes did they use? What were wills and court cases like? These questions and more are explored in Toni Mount’s delightful book, “A Year in the Life of Medieval England”.

I would like to thank Amberley Publishing for sending me a copy of this book. This book looked really intriguing and I really wanted to read a book covering medieval England.

This book was an absolute joy to read. Mount’s book is like a diary, it documents every day of the year with new facts and events. From January 1st to December 31st, Mount dives into the lives of both the rich and the poor alike. Unlike normal diaries, Mount does not stay with one specific year. Instead, she includes events from 1066 all the way through 1500 to give a full view of what life was like in Medieval England. I normally do not like it when a book jumps around chronologically, yet it worked rather well in this book.

From William the Conqueror to King Henry VII and every king in between, Mount explores the lives of the monarchy, highs, and lows. Coronations, battles, births, and deaths, with numerous treaties in-between. Naturally, there were a lot more members of the lower classes than the royal houses, but Mount chose a handful of their colorful stories to include in this book. What is wonderful is that you truly understand what they might have been going through since Mount has transcribed letters, lawsuits and wills so that the readers can get that window into the past.

What I really loved about this book was that Mount was able to include a plethora of facts while keeping the writing style comprehensive so that even a novice can understand. Mount does site each of her sources at the end of each passage for convenience, but it also acts as a stepping stone for those who want to do their own independent research. Of course, with any dive into a new area of study, there will be terms that might be unfamiliar to new students, but Mount takes the time to define these terms.

From Plantagenets to peasants, the stories of Medieval England come back to life in this rather handy companion book for inspiring medievalists. An easy and thought-provoking read that anyone who is interested in Medieval England would be delighted to have in their own collections. If you want a book that explores what medieval people, both rich and poor, experienced in a year, I highly recommend you read, “A Year in the Life of Medieval England” by Toni Mount.

There are quite a few events that one can name that radically shaped the course of British history. None more so than the events of 1066, the year that saw Norman, Breton, Flemish, and French forces, led by the Duke of Normandy, William the Conqueror, invaded England in what we know today as the Norman Conquest. Most history books tend to focus on the men who lived before, during, and after the Norman Conquest: Aethelred the Unready, Edward the Confessor, Cnut, Harold II, Harald Hardrada, and of course William the Conqueror just to name a few. What the history books tend to gloss over is the strong women who stood by their husbands, brothers, and sons during this conflict. Who were these women? What were their stories? How did they help their families before, during and after 1066? These questions are answered in Sharon Bennett Connolly’s delightful book, “Silk and the Sword: The Women of the Norman Conquest”.

I would like to thank Amberley Publishing and Sharon Bennett Connolly for sending me a copy of this book. It has been a long time since I personally studied the Norman Conquest, so I found it rather enjoyable to read about a subject that I really don’t know a lot about.

Connolly explains in her introduction why she wrote this particular book about these extraordinary women:

From Emma of Normandy, wife of both King Cnut and Aethelred II, to Saint Margaret, a descendant of Alfred the Great himself, we will trace the fortunes of the women who had a role to play before, during and after the momentous year of 1066. Throughout these tumultuous times, women played a prominent part, in support of their husbands, their sons and of their people, be they English, Norman, Danish or Norwegian. Their contributions were so much more than a supporting role, and it is time that their stories were told, and the influence they had on events, was examined in detail. …My intention is to tell the story of the Norman Conquest, while providing the women with a platform for their stories, from the dawn of the eleventh century to its close. (Connolly, 13-14).

The story of the Norman Conquest does not start or end in 1066; 1066 is the climax of the story, which is why Connolly explores women from before, during and after 1066. Women like Lady Godiva, whose story many people think they know, but the story of her infamous ride is more fictitious than fact. Emma of Normandy, the wife of both Aethelred the Unready and King Cnut,  who used her political influence to protect her sons. Matilda of Flanders, the wife of William the Conqueror, who helped her husband as regent of Normandy while he was in England. St. Margaret, Queen of Scotland, who helped reform Scotland and bring it into the Roman Catholic faith. Edith, Gytha and the wives of Harald Hardrada who followed their husbands into the battlefield.

These are just a handful of the stories Connolly explores in this wonderful book. Connolly has meticulously researched the men and women who were all part of the events that led to and after the Norman Conquest. I took ample amounts of notes on this particular book, which to me was rather enjoyable. Connolly makes the rather daunting subject of the Norman Conquest and makes it so even a novice on the subject can understand it. If you are interested in the Norman Conquest, especially about the women during this time, I highly recommend you read, “Silk and the Sword: The Women of the Norman Conquest” by Sharon Bennett Connolly.