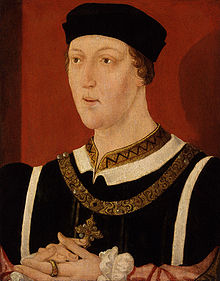 (Born December 6, 1421- Died May 21, 1471). Son of Henry V and Catherine of Valois. Married to Margaret of Anjou. He had one son Edward of Westminster. Henry VI was a weak ruler who, combined with his bouts of mental illness and no desire to rule, led England to lose its lands in France and brought England into a 30 year civil war known as the Wars of the Roses.

Henry VI was the only child of Henry V and his wife Catherine of Valois. He was born on December 6, 1421 and became king of England at the tender age of nine months when his father died on August 31, 1422. Six weeks later, he became king of France after his grandfather Charles VI died, which was agreed upon with the Treaty of Troyes. A regency council was called and Henry’s uncle John, duke of Bedford, became his first regent, and was charged with taking care of the French, led by the king that the French declared, Charles VI’s son Charles VII. Both Charles VII and John duke of Bedford kept the Hundred Years’ War dragging on. The English captured Orleans in 1427, but in May 1429, a young Joan of Arc led a siege on Orleans, which the French was able to reconquer. This led to French nationalism which allowed the French to drive the English out of the Loire Valley and Charles VII was officially crowned king of France in June 1429.

This made Bedford nervous so he quickly had Henry VI crowned king of England in November 1429 and crowned king of France in 1431.  He was the first English king who was also the king of France, but it did not last long. With the newly founded French nationalism, the English were losing their French lands that Henry V had conquered left and right. This made Philip the Good, duke of Burgundy, an ally of the English, nervous, and so he signed the Treaty of Arras with Charles VII in 1435, which recognized Charles VII as the King of France. The Hundred Years’ War would continue for another 18 years until John Talbot, the earl of Shrewsbury was defeated at Castillon in 1453. The English lost all of their French territories, except for Calais.

John, duke of Bedford, was regent until his death in 1435. After Bedford died, Humphrey, duke of Gloucester became the protector, but he did not have the same control of the government that Bedford did. In 1437, Henry declared himself of age before his 16th birthday. Henry was a weak ruler who was not interested in ruling at all, so he allowed some of the least scrupulous people to control the government. One of these men was William de la Pole, earl of Suffolk, who became the king’s steward in 1435. William was a peacemaker at heart, which led to the loss of France; his opponent at court was Humphrey of Gloucester, who wanted the war with France to continue. Suffolk was able to negotiate the marriage between Henry VI and Margaret of Anjou in 1444, in exchange for Henry surrendering Maine to the French.  The couple was married on April 23, 1445. This was not a popular decision and Henry’s life was threatened so Margaret, Suffolk and Henry left London. Margaret and Suffolk convinced the king that Gloucester was plotting an uprising so Henry had him arrested and confined at Bury St. Edmunds in February 1447, where he would die a week later. The people were not satisfied with this and Suffolk decided to switch from peacemaker to warmonger and invaded Brittany in 1449. This brought Normandy into the middle of the Hundred Years’ War and Brittany was conquered by the French in 1450. This was the last mistake by Suffolk, who was arrested and banished, but his ship was intercepted at Dover and Suffolk was killed.

Suffolk’s allies were scapegoats for everything that was going wrong in France, which led to the revolution led by John Cade in May 1450. It was similar to the Peasants’ Revolt, however Henry VI was no Richard II and the revolt lasted for two months, until John Cade’s death. The purpose of this revolt was to purge the government, but the king did not live up to their expectations. Instead he polarized the government even further when he appointed Edmund Beaufort, the Duke of Somerset as his closest adviser. Somerset was a failure in France and he gained some notable enemies at court, especially Richard, duke of York, who was banished  to Ireland in 1447 for supporting Gloucester, but returned to England and to court in August 1450, demanding his place in the Council.

Somerset’s and York’s  rivalry simmered for several years, until  August 1453, when Henry VI had his first bout with mental illness. We are not sure what he suffered from but for weeks, he was unresponsive to everything. Some believe it was triggered by the loss of France. It affected him so much that he did not even acknowledge his only son Edward, believing that his son was born of the Holy Ghost. During this time, Richard Duke of York was made Lord Protector  in 1454 and had Somerset arrested. When Henry recovered, he restored Somerset and had York dismissed. This was the last straw for York. York and Somerset met on the battlefield at St. Albans on May 22, 1455, where Somerset was killed. This should have been the end of the conflict, however it was only just the beginning.

Henry was going to reconcile with York but another bout of mental illness hit Henry in November 1455 and York was made Lord Protector again; he was dismissed in February 1456. It was then that Margaret of Anjou took up her husband’s cause. She encouraged the new duke of Somerset Henry Beaufort to fight against York. The battlelines were being drawn. The Yorkists were led by Richard duke of York, Richard Neville earl of Salisbury and his son Richard Neville earl of Warwick. The Lancastrians were under Henry VI, but led by Margaret of Anjou, Somerset, and Henry Percy, third earl of Northumberland. In 1459, at the battle of Ludlow, the Lancastrians won and sent the Yorkists into hiding; however the Yorkists came back with a vengeance at the battle of Northampton. In September 1460, Richard duke of York officially placed his claim to the throne to Parliament. In order to avoid more conflict, York was declared the heir to the throne, in place of Prince Edward.

Henry VI seemed to be okay with this arrangement, but Margaret was not about to let this insult stand. On December 30, 1460 at the battle of Wakefield, York was killed. Margaret continued her march to London when in 1461, she met with Warwick and defeated him at the second battle of St. Albans. Warwick fled and raised another army with York’s son Edward and marched into London on March 1461. Then, in the bloodiest battle of the Wars of the Roses, Towton, the Lancastrian forces were defeated and Edward became Edward IV. Henry and Margaret fled to Scotland to seek aid from King James III. In exchange for the aid, Henry gave the Scots Berwick. After a few years, Henry was seen as an embarrassment to the Scots and so they returned him to northern England, where he was captured and imprisoned in the Tower of London by English forces in July 1465.

It looked like Henry’s days were numbered, but then on October 3, 1470, he was removed from the Tower and made king yet again. What had happened was that the earl of Warwick switched sides and fought for Henry VI and Margaret of Anjou. Warwick even had his daughter married to Henry’s son Edward to show his allegiance. However, Edward IV came back in April 1471 and killed Warwick and recaptured Henry VI. On May 4, 1471, Margaret’s forces faced off against Edward IV at the battle of Tewkesbury. It was a devastating loss for the Lancastrians as Prince Edward was killed and Margaret was imprisoned in the Tower. On May 21, 1471, King Henry VI was murdered. It is unknown who killed him, but many suspect that it was under the orders of  King Edward IV.