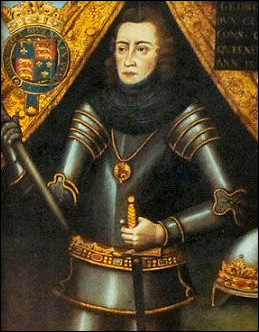 (Born October 21, 1449- Died February 18, 1478). Son of Richard Plantagenet, 3rd Duke of York and Cecily Neville, Duchess of York. Married to Isabel Neville, Duchess of Clarence.
Father of Anne of York, Lady Margaret Pole, Countess of Salisbury, Edward Plantagenet, 17th Earl of Warwick, Richard of York. George was a young man who believed that he would be a better king than his brother Edward IV. He revolted a few times and it led to his death by an unusual means.

George Plantagenet was born on October 21, 1449 to Richard Plantagenet, 3rd Duke of York and Cecily Neville, Duchess of York. His father died at the battle of Wakefield on December 30, 1460 and in March 1461, his brother became King Edward IV. George was created the 1st Duke of Clarence and a Knight of the Garter by his brother and the following year, he received the Honour of Richmond and was created lord-lieutenant of Ireland.

When George was named as a possible suitor for Mary, the daughter of Charles the Bold, later the Duke of Burgundy, he would enter into the influence of Richard Neville, 16th Earl of Warwick. Warwick, also known as “the kingmaker”, helped Edward IV become king but when Edward married Elizabeth Woodville instead of Bona of Savoy, which would have established an alliance with France, Warwick and Edward were not as close as they once were. Warwick decided to get back at Edward and in July 1469, George married Warwick’s daughter Isabel (or Isabella), which was a marriage that Edward did not support at all.

Warwick then started a series of uprisings in northern England; Edward was a popular king but his marriage with Elizabeth Woodville sullied his image a little while Warwick was seen as a national hero. Edward did employ an army, but when he saw that he was outnumbered, he dispersed his army and allowed himself to be captured by Warwick. Warwick had Edward imprisoned in the Tower, but when his reputation began to suffer, he released Edward in October 1469. Warwick and George both decided to reconciled with Edward but Edward never truly trusted either of them ever again.

George was loyal to his brother, but when Warwick deserted Edward and fled to France, George went with his father in law. On the way to France, Isabel gave birth to their first child, a girl, on 16 April 1470, in a ship off Calais. The child would not survive. Warwick joined forces with Margaret of Anjou and Louis XI of France to restore Henry VI to the throne. In September 1470, Warwick and his rebellion made its way to England. Warwick removed Henry VI from the Tower and restored him to the throne.

Henry VI rewarded George by making him next in line to the throne after his own son, removing Edward IV from the line of succession completely. Warwick had his younger daughter, Anne Neville, George’s sister-in-law, marry Henry VI’s son in December 1470. This obviously infuriated George since this meant that Warwick had no desire of making George the next king and so George secretly reconciled with his brother.

Warwick made a mistake and decided to take Louis XI’s advice and declare war on Burgundy. This forced the duke of Burgundy, who had stayed on the sidelines this entire time, to help Edward IV raise an army. Edward returned to England on March 11, 1471. His army defeated Warwick’s army at the Battle of Barnet in April 1471, where Warwick was killed. After Warwick’s death in April 1471 Clarence appears to have seized a vast sum of the estates Warwick owned. George did not gain all of Warwick’s properties as his younger brother Richard Duke of Gloucester married the widow Anne Neville. In March 1472 was created by right of his wife Earl of Warwick and Salisbury. A quarrel between George and Richard ensued, and in 1474 the king interfered to settle the dispute, dividing the Warwick estates between his brothers.

In 1475 George ‘s wife Isabel gave birth to a son, Edward, later Earl of Warwick. Isabel died on December 22, 1476, two months after giving birth to a short-lived son named Richard. Though it is believed that Isabel died of either consumption or childbed fever , George was convinced she had been poisoned by one of her ladies-in-waiting, Ankarette Twynyho, whom, as a consequence, he had judicially murdered in April 1477 right after her trial. The same year, George was eligible for Mary Duchess of Burgundy’s hand, but when Edward refused the marriage suit, George left court.

Edward was convinced that George was aiming at his throne after three of George’s men were tried for treason and were executed. George was thrown into prison, and in January 1478 the king unfolded the charges against his brother to the parliament. He had slandered the king; had received oaths of allegiance to himself and his heirs and had prepared for a new rebellion. Both Houses of Parliament passed the bill of attainder, and the sentence of death was announced. It is said that Edward gave his brother a choice on how he would die and George said that he would like to be drowned in a butt of Malmsey wine. What we do know is that George Duke of Clarence was executed in private either on February 17th or 18th 1478. Two of his children would outlive him: Edward earl of Warwick, who was executed in 1499, and Margaret Pole Countess of Salisbury.