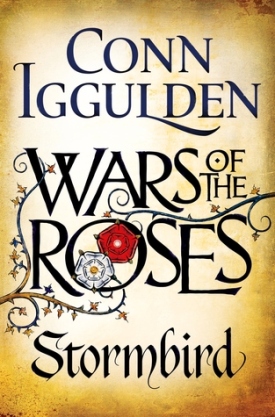 The Wars of the Roses is often remembered for the battles that were fought in England. Bosworth. Towton. Barnet. Tewkesbury. These battles and the names of the men and women like Richard III, Margaret of Anjou, Henry VI, Richard Duke of York, Edward IV and the Tudors are etched into the history of England. However, what started this conflict was not on the battlefield, it was inside the English Court.  The decisions of a few men led to revolts that swept throughout England. So what was life like during this tumultuous time in English history? That is one of the questions that Conn Iggulden wanted to explore in his book series, “Wars of the Roses”. The first book in the series is called “Stormbird” and it explores the time after Henry VI marries Margaret of Anjou as well as Cade’s Rebellion, which wanted to tear England apart.

Conn Iggulden begins his book with the death of Edward III and his sons around his bedside, wondering what would happen to their beloved England. The sons of Edward III would become the patriarchs of some of the most important houses during the Wars of the Roses, York, and Lancaster. The story truly begins 66 years after the death of Edward III and young Henry VI is on the throne. Henry needed a truce with France and it was up to men who he could trust to make sure this happened. One of these men was William de la Pole, Duke of Somerset. The other, at least in “Stormbird”, was Henry VI’s spymaster Derihew “Derry” Brewer. Derry Brewer is a unique and complex character who works in the shadow to make sure that his king and his country are well protected. That includes arranging a marriage between Henry VI and the young Margaret of Anjou.

Margaret is portrayed as a caring and loving wife to Henry VI who will do anything to make sure her husband is taken care of and their young son is strong.  Their marriage seems happy, however, there are those who live outside the royal court who are suffering. With a weak leader and men who help the king lead making things worse,  the common people take it the hardest and they decide to do something about it. Led by a man named Jack Cade, the Cade’s Rebellion decides to march on London to overthrow the government.

In his Author’s Note, Conn Iggulden explains why he decided to focus a lot of his book to the riots and unrest in England:

Historical fiction sometimes involves filling in the gaps and unexplained parts of history. How is it that England could field fifty thousand men for the battle of Towton in 1461, but was able to send only four thousand to prevent the loss of Normandy a dozen years earlier? My assumption is that the unrest and riots in England put such a fear into the authorities that the major armies were kept at home. Jack Cade’s rebellion was only one of the most serious uprisings, after all. Rage at the loss of France, coupled with high taxes and a sense that the king was weak, brought England close to complete disaster at this time. Given that Cade breached the Tower of London, perhaps the court and Parliament were right to keep soldiers at home who could have been used to good effect in France. (Iggulden, 479).