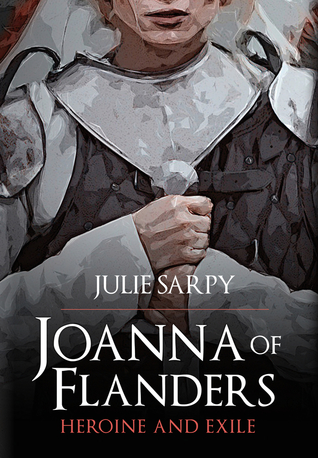 Strong medieval women who helped lead armies were unusual phenomena. Women like Eleanor of Aquitaine, Isabella of France, and  Margaret of Anjou, have been seen as “she-wolves” and their stories have lived on for centuries. They were all queens, but strong women from the past could be of any rank, even though their stories are not celebrated as much. Take, for example, the story of Joanna of Flanders, Countess of Montfort and Richmond, Duchess of Brittany. She was a wife and mother who protected Hennebont Castle in Brittany from the French in 1342 while her husband was held captive. She then leaves her beloved Brittany for the court of Edward III of England and all but disappears from the historical record until her death in 1374. What happened to this extraordinary woman and why did she disappear from the historical records? Julie Sarpy answers these questions and more in her book, “Joanna of Flanders: Heroine and Exile”.

I would like to thank Amberley Publishing for sending me a copy of this book. Before I read this book, I knew absolutely nothing about Joanna of Flanders or the part she played in protecting Brittany from France.

In the past, historians, especially Arthur Le Moyne de La Borderie,  have claimed that Joanna was held in confinement by Edward III because she went “mad”. However, Sarpy does not agree with this assessment of her life and she hopes to change that view with this book, as she explains in her introduction:

This book strives to set the record straight about Joanna of Flanders through a fresh reading of legal and administrative records, narrative accounts and comparative studies. It seeks to reveal the pretense behind her guardianship and the means by which Edward III of England perpetrated a hoax. I have tried to separate the facts from fiction and reconcile the events of Joanna of Flanders’ life after October 1343 when she retired to Yorkshire with the known record. Centrally, it is an attempt to demonstrate that her captivity at the hands of Edward III was purposeful and politically motivated. Unfortunately, since then, some authors have been complicit in the sullying of her reputation by claiming she was incarcerated due to mental defect and I seek to correct that. (Sarpy, 10).

Sarpy introduces her readers to the complex relationship between Brittany, France, and England, as well as the de Montforts and the Blois- Penthievre faction that all played a part in the First Breton Civil War. It is these relationships that are crucial to understanding the events of Joanna of Flanders’ life. The siege of Hennebont showed Joanna as a threat to Edward III’s plans for Brittany, so he had to do something about her. Joanna takes her children to England and Edward III will eventually send her to Tickhill Castle. Sarpy explores mental illness, the medieval laws towards protecting them and about the confinement of the nobility. What Sarpy does very well is that she shows examples of legal cases as well as those who were mad and compared their stories to Joanna’s own story.

Sarpy’s book contains a ton of information, both historical and legal, but it is relatively easy to understand. As I stated earlier, I didn’t know anything about Joanna of Flanders before I read this book and I did take copious amounts of notes. This book tells the story of Joanna of Flanders in such a way that those who are not familiar with her legacy can understand, yet it also sheds new light for those who knew her story beforehand. Julie Sarpy’s book, “Joanna of Flanders: Heroine and Exile” was an enlightening read and I recommend it to those who are interested in learning about Joanna of Flanders, Edward III, the early years of the Hundred Years’ War, and mental illness and confinement in medieval Europe.

“Joanna of Flanders: Heroine and Exile” by Julie Sarpy will be released in the US on October 1, 2019. If you would like to pre-order this book, you can find more information here: https://www.amazon.com/Joanna-Flanders-Heroine-Julie-Sarpy/dp/1445688549/ref=sr_1_1?keywords=Joanna+of+Flanders%3A+Heroine+and+Exile&qid=1562077490&s=digital-text&sr=1-1-catcorr