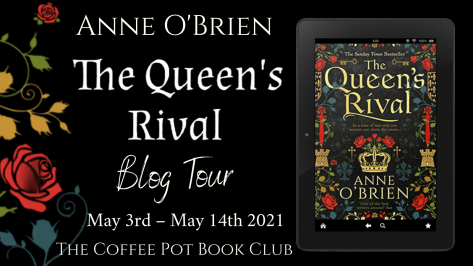 Today, I am pleased to welcome Anne O’Brien to my blog to discuss the inspiration for her latest novel, The Queen’s Rival. I would like to thank Anne O’Brien and The Coffee Pot Book Club for allowing me to be part of this blog tour.

In past years I have written about a variety of medieval women, either royal or attached to the Court.  I enjoy investigating how these women played a role in the political manoeuvrings of their day.  Although we so rarely hear the voices of these women, since they lived in a man’s world and the history was invariably written by men, their involvement was often considerable and they deserve our interest.

Cecily Neville, Duchess of York, is one of the most appealing women of English medieval history, worthy of celebration.  Most medieval women verge towards the invisible, a two-dimensional entity without character or apparent influence; Cecily Neville is an exception.  The Wars of the Roses were both vast in scope and complex in the range of family connections.  So was Cecily’s own Neville family with its royal blood inherited through their mother Joan, Countess of Westmoreland, daughter of John of Gaunt. Cecily demanded in a regal fashion that she be allowed to speak for herself.  It was a challenge that lured me to become involved; I accepted the challenge and wrote about her.

Without a doubt, Cecily was a remarkable woman, living for eighty years through five reigns, interacting with a vast dramatis personae of famous, infamous, and influential characters in these tumultuous years.  She was the mother of two kings, Edward IV and Richard III, and  grandmother to a Queen Consort, Elizabeth of York, who stepped across the divide between York and Lancaster and married King Henry VII.

On the surface, this would seem to be a life bringing Cecily immense satisfaction and personal achievement, but it was also a life of tragedy.  Cecily outlived all but two of her twelve children, both daughters, some dying in infancy, others meeting terrible ends.  George, Duke of Clarence, was executed for treason, on the orders of his brother King Edward, in the Tower of London.  Richard III died on the battlefield at Bosworth; Edmund of Rutland met his end in an act of revenge after the Battle of Wakefield.  What heartbreak this must have inflicted on her, added to the death of her husband, Richard, Duke of York, at Wakefield.

Cecily’s life also witnessed its share of scandal.  The rumour of her liaison with the common archer Blaybourne, thus prompting the blot of illegitimacy against King  Edward IV, was too valuable a rumour to ignore for those such as the Earl of Warwick and Duke of Clarence who would willingly depose King Edward.  Was the scandal true?  Unlikely, but the widespread gossip must be faced.  How difficult for a woman of Cecily’s pride to accept that her own family would dishonour her reputation.

Would such tragedy obliterate the strength of Cecily’s character?  Cecily worked tirelessly for the House of York. She stood by her children as far as it was possible, even George of Clarence, trying to bring him back into the Yorkist fold.  In Ludlow, abandoned by her husband, Cecily faced a leaderless Lancastrian army and howling mob intent on plundering the town. She proved to be a woman of great courage.  As old age approached, she devoted herself to a life of duty and formidable piety almost worthy of the life of a nun, a life of loyalty to the family she had always supported.

Cecily, Duchess of York, was the doyenne of late medieval history, the Queen who was never crowned.  It would have been unforgivable of me to leave her out of my pantheon of medieval ‘heroines’.

One family united by blood. Torn apart by war…

The Wars of the Roses storm through the country, and Cecily Neville, Duchess of York, plots to topple the weak-minded King Henry VI from the throne.

But when the Yorkists are defeated at the Battle of Ludford Bridge, Cecily’s family flee and abandons her to face a marauding Lancastrian army on her own.

Stripped of her lands and imprisoned in Tonbridge Castle, the Duchess begins to spin a web of deceit. One that will eventually lead to treason, to the fall of King Henry VI, and to her eldest son being crowned King Edward IV. 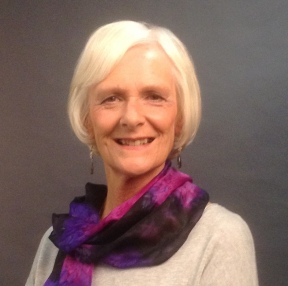 Sunday Times Bestselling author Anne O’Brien was born in West Yorkshire. After gaining a BA Honours degree in History at Manchester University and a Master’s in Education at Hull, she lived in East Yorkshire for many years as a teacher of history.

Today she has sold over 700,000 copies of her books medieval history novels in the UK and internationally. She lives with her husband in an eighteenth-century timber-framed cottage in the depths of the Welsh Marches in Herefordshire. The area provides endless inspiration for her novels which breathe life into the forgotten women of medieval history.