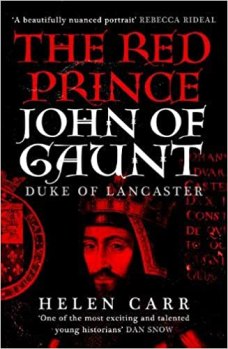 When one studies the history of the English monarchy, we tend to consider those who ruled and those who advised the ruler as significant characters. We rarely study the family members of the monarch who did not win the right to rule the kingdom. Yet, they are often either extremely loyal or they desire the crown with such ferocity that they rebel against their own family. It seems like a rather cruel world, but that was the life of a medieval monarch. True loyalty for one’s family was a rare feat. One man showed the depth of his loyalty to his family, even when the people despised him. He was the son of King Edward III, the brother of the famous Black Prince, the uncle of King Richard II, and the father of Henry Bolingbroke who would become King Henry IV. Gaunt’s reputation and legacy have been marred by his wealth and the role that he played with the Peasants’ Revolt, but was he such a bad person? In Helen Carr’s brilliant debut biography, “The Red Prince: The Life of John of Gaunt, the Duke of Lancaster”, she looks to uncover the truth about the man behind the throne and why he never desired the crown for himself.

Carr has chosen to call John of Gaunt “The Red Prince”, which makes a lot of sense for someone who understands the significance of his legacy in history. His son by his first wife Blanche of Lancaster, King Henry IV, was the first Lancastrian King of England. Obviously, they were represented by the red rose in the rather poetic sounding Wars of the Roses in the 15th century and their half-siblings, the Beauforts (who were descended from the children of John’s third wife and former mistress Katherine Swynford) would continue the legacy in their own way. There would be no Lancastrian Kings of England or Wars of the Roses or Tudor dynasty without John of Gaunt.

I am getting a little ahead of myself. After all, during John of Gaunt’s lifetime, none of this happened. He was just the son of Edward III and the brother of the Black Prince when he earned the title of the first Duke of Lancaster. He earned his reputation as a loyal soldier fighting alongside his brother and father in the conflict with France that would be known in history as the Hundred Years’ War. His loyalty to his brother and father and his bravery as a knight was legendary. He gained vast amounts of wealth from his marriages to Blanche of Lancaster and Constance of Castile. He was a patron of the arts, especially to Geoffrey Chaucer, and championed those who wanted to challenge the way religion was understood during the 14th century.

He had everything he could ever want until his world came crashing down around him. The Black Prince died of illness and his father King Edward III would soon follow, leaving the throne to his nephew King Richard II. To say things got off to a rocky start would be an understatement as John of Gaunt and other government officials were accused of raising taxes so high that it triggered what we know as the Peasants’ Revolt. On top of all of the problems in England, John of Gaunt decided to become King of Castile with his wife Constance. John of Gaunt led a life full of adventure, risks, and above all, loyalty to his family.

Carr does a magnificent job of bringing Gaunt’s life into focus. So much of his reputation has been tainted over time, but Carr did not shy away from the challenge. This is one of the best biographies that I have read this year so far. John of Gaunt deserved to have his story retold and Helen Carr was the perfect historian to tell his story for a newer generation. Carr’s writing style is engaging with meticulous attention to detail. This is a gorgeous debut biography and I cannot wait to see what Helen Carr will write next. If you want to read a biography about the founder of the Lancastrian dynasty, “The Red Prince: The Life of John of Gaunt, the Duke of Lancaster” by Helen Carr is a must-read.