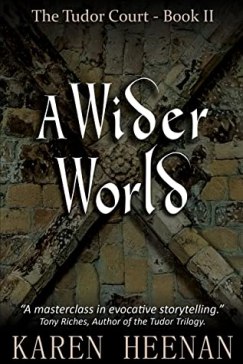 The year is 1558, and Queen Mary I is dying. England is engaged in a war between the Reformation and Catholicism. Caught in the middle is an older man named Robin Lewis, who is being taken to London to face his death as a heretic. Fearful that his story may never be told, Robin Lewis tells his captor his tale through the reigns of three Tudor rulers, Henry VIII, Edward VI, and Mary I. Can his story save his life from certain destruction, or is Robin doomed for all eternity? This is the premise of Karen Heenan’s second book in The Tudor Court series, “A Wider World.”

I want to thank Karen Heenan for sending me a copy of this book. I really enjoyed her first novel, “Songbird,” so I was looking forward to seeing where Heenan would take the series.

We have met Robin Lewis in “Songbird” as the rival of Bess and the stuck-up kid in Music. We don’t see much of his story in the first novel. Heenan has decided to take this side character that is a bit polarizing and write a novel about his life, which I love.

It is a bold choice to start a novel with the protagonist being sentenced to death for being a heretic, but the way Heenan structures this story is brilliant. Heenan begins her novel with Robin’s arrest and his captor, William Hawkins, taking him from the countryside to London to be locked in the Tower. Robin acts like a Tudor Scheherazade to delay the inevitable, telling his story through flashbacks to Hawkins.

What makes this story so unique are those flashbacks that are so vivid and filled with men and women that shaped Robin into the man that he became. Robin is a bookworm who prefers the company of texts to other people, so to see him interact with others is just a delight. They include brothers of a monastery, a servant named Seb, and a beautiful Italian woman named Bianca, who shared Robin’s love of learning. Of course, it wouldn’t be a Tudor novel without famous figures such as Wolsey, Cromwell, and Holbein. Heenan uses these figures as secondary characters to enhance Robin’s story.

At the heart of this novel is the dissolution of the monasteries and Robin’s travels abroad, especially his stops in Italy. Although Cromwell forces Robin to help dissolve the monasteries, his past with monks makes him question the assignment he has been given. Robin’s faith and his relationships with the church in England and Italy are very distinct and shape how he views the charges brought against him at the beginning of this novel.

Heenan has once again made a delightful tale of struggles inside the Tudor court by someone on the sidelines. The blending of English history with elements from other cultures was inspiring. Weave current events with a character’s past is extremely difficult, yet Heenan does it seamlessly. This enchanting novel is the perfect sequel to “Songbird.” If you are a fan of Tudor historical fiction, “A Wider World” is a must-read.