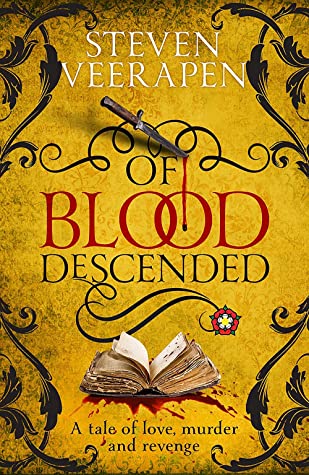 The year is 1522, and London is in a jovial mood. King Henry VIII and his wife Catherine of Aragon are to play host to the Holy Roman Emperor Charles V as he visits England. As one of King Henry VIII’s most loyal advisors, Cardinal Wolsey had the great honor of hosting a grand masque featuring King Arthur and the Black Knight for the distinguished company. Unfortunately, as preparations for the luxurious masque are in full swing, Wolsey’s historian is horrifically murdered. The only one who can solve the case is Anthony Blanke, the son of John Blanke, the trumpeter before the masque is ruined, and Henry VIII discovers the truth. The story of this case is told in Steven Veerapen’s latest novel, “Of Blood Descended.”

I want to thank Steven Veerapen for sending me a copy of his latest novel. I am always in the mood for a good Tudor mystery, and when I heard that the main character was the son of John Blanke, I was intrigued to see how Veerapen would portray his story.

Veerapen begins this novel by introducing Pietro Gonzaga, Cardinal Wolsey’s historian, and his family as Gonzaga is on the cusp of revolutionary discovery. We then cut to Anthony Blanke returning to London after his father, John Blanke’s death. He is reluctant to go back to court and all of its intrigues, but it is necessary as Cardinal Wolsey himself summoned him. Wolsey is hosting a grand masque in honor of King Henry VIII and the Imperial Emperor Charles V; the theme is King Arthur and the Black Knight, and he has decided to cast Anthony as the titular Black Knight.

Progress with the masque goes smoothly until someone discovers Signor Gonzaga’s body after being brutally slain. Gonzaga’s murder sets the stage for a whirlwind chase to find the murderer, but the monster leaves a trail of blood behind him, and no one is safe. The action, intrigue, and mysteries will keep you guessing until the final pages to figure out who the mastermind was behind it all.

I loved the mystery behind the murder and how Veerapen was able to weave the Arthurian legends and prophecies with the story of the Tudors. I enjoyed the cameos from Thomas Boleyn and Anne Boleyn, but my favorite cameo was Henry VIII’s historian Polydore Vergil, who does not appear that often in Tudor historical fiction. I thought Anthony was such a fascinating protagonist as he gave a different perspective on the diversity of London life. Even though characters like Anthony Blanke, Sister Jane, Mark Byfield, and Harry Gainsford are entirely fictional characters, they feel like they would fit exceptionally well in the Tudor world.

I thoroughly enjoyed every twist and turn that Veerapen included in this novel. I hope to see more stories with Anthony, Jane, Mark, and Harry. If you enjoy Tudor murder mysteries, you will be enthralled with “Of Blood Descended” by Steven Veerapen.