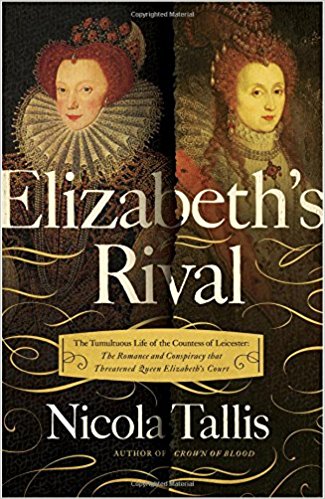 When we think of Lettice Knollys, we often think about the kinswoman who made Elizabeth I really mad when she married Robert Dudley, Elizabeth’s favorite. These two women were once best of friends, but that one event torn then apart forever.  However, there is more to Lettice Knollys than this one event. She was married three times, survived seven different monarchs, and lived well into her nineties. Her story has always been hidden, until now. Lettice Knollys story is finally being told in “Elizabeth’s Rival: The Tumultuous Life of the Countess of Leicester: The Romance and the Conspiracy that Threatened Queen Elizabeth’s Court” by Nicola Tallis.

Lettice Knollys was born on November 6, 1543 to Sir Francis Knollys and Katherine Carey; her mother was the Mary Boleyn, the sister of Anne Boleyn and mistress to Henry VIII. Lettice was one of sixteen children. Her family was solely devoted to their Protestant faith and to their service to the crown. Two of Lettice’s brothers, Robert and William, would later become favorites in Elizabeth’s court. Katherine Carey would be one of the ladies in Elizabeth’s court alongside Katherine Knollys and Lettice; Lettice and Elizabeth became very good companions very quickly. Lettice caught the eye of one Walter Devereux, Viscount Hereford, and sometime between 1560 and 1562, they were married, much to the chagrin of the queen who wanted her ladies to remain single. They would have four children: Dorothy, Penelope, Robert and Walter (named after his father).

Both Sir Francis Knollys and Walter Devereux would travel towards Scotland to deal with rebellion for Elizabeth, but Walter would also travel to Ireland for Elizabeth as well. While Walter was away, it is rumored that Robert Dudley had an affair with Lettice after his wife Amy died in 1560, but in 1574, Robert was having an affair with Douglas Sheffield. When Walter died on September 22, 1576, Lettice was  left to deal with the copious amount of debt her husband left her. It wasn’t until September 21, 1578 when Robert Dudley and Lettice Knollys would marry in secret.

Elizabeth would banish Lettice from court forever, but Lettice’s story does not end there. In fact, this is where her story picks up the pace. After Robert Dudley died on September 4, 1588, he left Lettice with yet again a copious amount of debt to pay off so in July 1589, she married Sir Christopher Blount, thinking that he would help alleviate some of the debt; he did not. On top of all of this, her children were having their own martial difficulties and her son Robert Devereux, the 3rd Earl of Essex, would launch an unsuccessful rebellion against Elizabeth and would be executed February 25, 1601; Sir Christopher Blount would also be executed on March 18, 1601. After Elizabeth I died on March 24, 1603, Lettice thought her problems would be solved after James I cleared all of her debt, but Dudley’s illegitimate son by Douglas Sheffield, Robin Sheffield, would file a suit against her, which Lettice would win. On December 25, 1634, Lettice Knollys would die after living well into her 90’s.

Nicola Tallis does an excellent job in navigating Lettice’s life and times. With the amount of research and care Tallis took in portraying this woman who was once hidden in history behind her husband Robert Dudley and Elizabeth I. Her story is one of survival and strength. With this fabulous book, “Elizabeth’s Rival” by Nicola Tallis, Lettice Knollys will not be hidden in the past anymore.