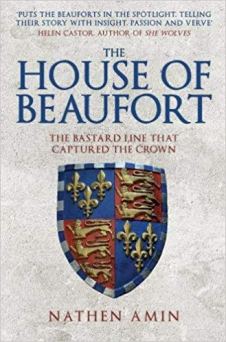 The houses of York, Lancaster, the  Nevilles, the Howards, the Mowbrays, the Percys, and the Tudors are often recognized as the families involved in the Wars of the Roses. However, there was one more house that was just as important as the others; the Beauforts. The Beauforts were the sons and daughters of John of Gaunt, Duke of Lancaster and his mistress Katherine Swynford. They were considered bastards since they were born out of wedlock, yet they were connected to the house of Lancaster and rose to power by their own right. They would help change not only English history but the history of Europe forever. The Beauforts made a huge impact during the Hundred Years War and the Wars of the Roses, yet many people only recognize Margaret Beaufort and Edmund Beaufort 2nd Duke of Somerset. The Beauforts don’t get much attention. Nathen Amin, the founder of The Henry Tudor Society, wanted to tell the story of this remarkable family.  It is in his book “The House of Beaufort: The Bastard Line that Captured the Crown”, that the Beauforts are given the attention that they rightfully deserve.

Nathen Amin explains why he chose to focus on the Beauforts:

The Beauforts are a family often encountered when reading or studying the fifteenth century and the Wars of the Roses, although commonly relegated to supporting roles in the life and times of more prominent figures like Richard, duke of York, Edward IV, and Henry IV, V, and VI. They were always in the background, serving a king, counselling a king, and even fighting for or against a king. …Yet, there were few family units more influential in the governance of England during the period, and none more devoted to defending the Lancasterian dynasty, whether against France in the last vestiges of the Hundred Years War, or against the House of York in a new war of a very different kind. Born as bastards to a mighty prince, the Beauforts were the right-hand men of their royal kinsmen, amassing considerable authority on the national and continental stage. From uncertain beginnings, the Beauforts became earls, dukes and cardinals, and in time kings themselves, their blood seeping into every corner of the English artistocracy within a few generations of their birth. (Amin, 7).

So how exactly were the Beauforts able to accomplish all of this, going from bastards to kings? It starts with John of Gaunt marrying his mistress Katherine Swynford, making his four children with Katherine legitimate and they were given the name “Beaufort”, after his second marriage did not work out. After their half-brother King Henry IV( also known as Henry of Bolingbroke) became king, he allowed his half-siblings to obtain royal status, however, they could not be in line for the English throne.

John of Gaunt and Katherine Swynford’s four children found a way to live successful lives without pursuing the English throne and they continued to support their Lancasterian family. John Beaufort became the 1st Earl of Somerset and his children became earls, counts, dukes and his daughter Joan became Queen of Scotland. John Beaufort’s granddaughter was Margaret Beaufort, the mother of the future King Henry VII. Henry Beaufort was able to become a very wealthy man and was promoted all the way to Cardinal of England, quite a feat for an English man at that time. Thomas Beaufort became the  1st Duke of Exeter and his sister Joan Beaufort Countess of Westmoreland was the matriarch of the powerful Neville family.

The Beauforts went through numereous highs and lows as they worked hard to protect England and the honor of their Lancastrian relations. Nathen Amin is able to navigate the complex world of the English court during both the Hundred Years War and the Wars of the Roses to give us the intricate story of the Beaufort family. As someone who is acquianted with parts of the Beaufort family story, I found this book rather fascinating and very informative. This was my first time reading a book by Nathen Amin and I cannot wait to read more of his books. In a complex time, it would be easy to forget one person, but Amin spends the time to write about each Beaufort child and how they made a difference.

The only real issue I had with the book was the family tree. I wished that there were birth and death dates included because I found myself getting a tad bit confused about who was who, especially when some of the Beauforts shared the same name and a similar title.

Overall, I found this book extremely fascinating and informative. Amin’s writing style is easy to understand and he brings the Beauforts from the background and onto center stage. They may have started as illegitimate children of John of Gaunt and Katherine Swynford, but they rose to be dukes and kings. If you want to learn more about this remarkable family and their influence in both the Hundred Years War and the Wars of the Roses, I absolutely recommend that you read “The House of Beaufort: The Bastard Line that Captured the Crown” by Nathen Amin.