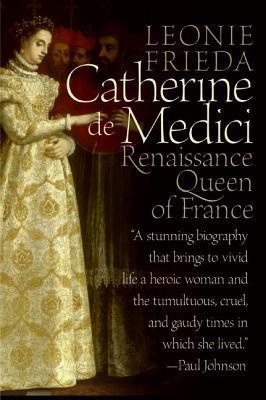 When we think about women rulers in the 16th century, some names, like Queen Mary I, Queen Elizabeth I, and Mary Queen of Scots, come to mind. However, another woman should be included in this list as her life helped keep the Valois dynasty alive and well in France, even though she was Italian by birth. Her name has been tainted with dark legends of poisoning, deadly incidents, and the infamous St. Bartholomew’s Day Massacre. This notorious queen was Catherine de Medici, and Leonie Frieda has chosen to shed some light on the myths and mysteries surrounding this misunderstood woman in her biography, “Catherine de Medici: Renaissance Queen of France.”

Catherine de Medici’s life was rough as her parents, Lorenzo II de Medici Duke of Urbino and Madeleine de La Tour d’ Auvergne, died shortly after she was born. A wealthy young heiress who was now an orphan, Catherine’s marriage was vital for the success of her family. The union meant for the young woman was with Henry II of France, the son of Francis I. Catherine fell deeply in love with Henry II. Still, another person in this marriage was Henry II’s mistress Diane de Poitiers. It took a while for Catherine and Henry to have the heirs necessary for their union to prove successful, but they did have ten children, including three sons that would become King of France; Francis II, Charles IX, and Henry III.

When her beloved husband, King Henry II, died in a jousting accident, a lance in the eye, Catherine had to step up and protect her family, no matter what. Her first son to be King was Francis II, alongside his Scottish bride, Mary Queen of Scots, but he died after only a year on the throne from a severe earache. Catherine had to act as regent for her third son, King Charles IX, as he was too young to rule independently. Unfortunately, his reign was mired by several wars of religion between Catholics and Protestants. One of the most tumultuous events of his reign occurred in August 1572, known as the St. Bartholomew’s Day Massacre, which left a massive black mark on the legacy of Catherine de Medici for her supposed role in the disaster. After the death of Charles IX, Catherine had to once again act as regent as her fourth and favorite son, Henry III, had to make the journey back to France after being named King of Poland. Catherine de Medici died in 1589, and her favorite son Henry III died a few months later, ending the Valois dynasty and making way for the Bourbon dynasty in France.

In my opinion, I found this book a tad dry in areas, especially concerning the eight wars of religion in France. As someone who doesn’t read much about 16th-century France and its politics, this book was a bit of a challenge for me, and I felt that in some places, Catherine de Medici was more of a side character than the principal character in her biography. I also felt that Frieda focused on the black myth of Catherine de Medici and her supposed evil deeds instead of trying to debunk them.

Overall, I think this was a decent biography. Frieda does have a passion for her subject, and it shows from the political quagmire that she tries to navigate to the fun facts about Catherine and her family. If you know the story of Catherine de Medici and 16th-century France, you might find this book fascinating, but it might be challenging for novices in this area of research. If you want to know more about Catherine de Medici, “Catherine de Medici: Renaissance Queen of France” by Leonie Frieda could be the book for you.

Two queens; one a wife and the mother of kings and the other a virgin who had to fight for the right to rule her country independently. Two women who found friendship and a rivalry between each other with only a sea that divided them and religious discord to drive them apart. Catherine de Medici and Elizabeth I would define what it meant to be female rulers in the 16th century for France and England, respectively. The tales of Elizabeth I and Catherine de Medici have been covered in numerous books, but a joint biography of these two powerhouses is a rarity until now. Estelle Paranque demonstrates how both queens greatly affected each other’s lives in her latest book, “Blood, Fire & Gold: The Story of Elizabeth I and Catherine de Medici.”

Paranque begins her book with a short story about an encounter between Elizabeth I’s English ambassador to France, Sir Nicholas Throckmorton, and Catherine de Medici, who acted as regent for her son Charles IX. It is an example of how each queen viewed diplomacy and the dance they had to do to keep their respective dynasties on the thrones of England and France.

Catherine de Medici was the daughter of Lorenzo II de Medici, Duke of Urbino, and Madeline de La Tour, d’Auvergne. Her parents died when Catherine was young, leaving her to be a wealthy heiress and a powerful pawn in the marriage market. Her husband would be King Henry II, known to have several mistresses, including Diane de Poitiers, who was her husband’s, true love. Despite issues with Diane, Henry and Catherine had a huge family, including several sons, including King Francis II, King Charles IX, King Henry III, and Francis, Duke of Anjou. After the death of her husband, Catherine worked hard to be the regent for her sons until they came of age to rule and continue the Valois dynasty.

In England, Elizabeth I was the daughter of Anne Boleyn and the notorious King Henry VIII; their relationship was the most infamous of the 16th century for obvious reasons. After the deaths of King Henry VIII, King Edward VI, and Queen Mary I, Elizabeth got her chance to rule England in her way. When the issue of Elizabeth’s marriage came into play, Catherine de Medici entered Elizabeth I’s life, starting a 30- year relationship that began as a friendship but changed into a rivalry in the end.

Catherine de Medici and Elizabeth I had to communicate through ambassadors and letters, which Paranque translated into modern English, making it easier for modern readers to understand. I cannot stress how much I loved this book and how Paranque was able to weave the stories of the two most powerful women in 16th-century Europe.

“Blood, Fire & Gold: The Story of Elizabeth I and Catherine de Medici’ by Estelle Paranque is a tour de force dual biography of two influential badass queens. This book is a must-read for anyone passionate about the 16th century.