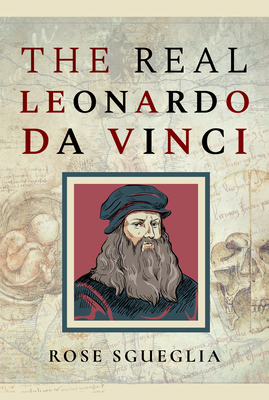 A man ahead of his time who never finished the tasks that he was given as his mind was constantly racing, thinking of new ideas. This is what we consider a genius or a Renaissance Man today, but during Leonardo da Vinci’s time, it was just considered odd. Leonardo da Vinci was an enigma. He could make the impossible possible. His art seemed to leap off the canvas with its realism. However, there are still so many mysteries surrounding his life and his works. What made this one artist/inventor so fascinating for centuries? In her book, “The Real Leonardo da Vinci” Rose Sgueglia opens the curtain to reveal Leonardo da Vinci’s truth and inner circle.

I would like to thank Net Galley and Pen and Sword Books for sending me a copy of this book. I am one of those people who is familiar with da Vinci’s works, but not so much with his actual life and what made him tick. I have always wanted to read biographies about the great artists of the Renaissance, but I didn’t know where to start. This was the perfect book to start my journey into art history.

To understand da Vinci’s lifestyle later in life, we have to understand his origins. His mother was an absent figure in his life as Leonardo was her illegitimate son, but his father seemed to have taken care of him. Leonardo was trained under Verrocchio where he would learn the skills that would be vital for his art career, however, it was his insatiable appetite for exploring new subjects that would make him a polymath to many.

Sgueglia dives into the intricacies of da Vinci’s life, including his love life which has been debated for centuries. As an illegitimate son, he was not tied down to one location so he frequently traveled and would be employed by some of the greatest families in Italy, including the Borgias, the Medicis, and Ludovico Sforza. Along the way, he would create his own following of artists that were loyal to him until the bitter end. Da Vinci would also encounter fellow masters Donatello and Michelangelo as he competed for commissions.

There were a few things about this book that I found a bit off or lacking. My big concern was the lack of illustrations of his lesser-known pieces of art and the artwork of other artists that Sgueglia references. If this is a biography about a well-known artist and inventor, then let’s celebrate the masterpieces and the inventions. I had to find the obscure artworks online while I was reading to act as a companion to get the full impact of what she was writing about. I also think it was a tad repetitive and I would have personally liked to have seen more books in the bibliography for research purposes.

Overall, I found this book was an adequate biography about Leonardo da Vinci. It is easy to read with intriguing facts that will captivate those who are new to da Vinci’s story. There is something intriguing about looking at the man behind these masterpieces and I think Sgueglia does an excellent job of showing a unique side of this artist’s life. If you want a great book that will introduce you to this polymath’s life and times, I recommend you read, “The Real Leonardo da Vinci” by Rose Sgueglia.