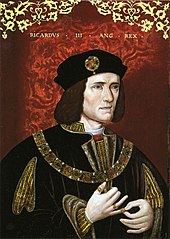 In honor of the third anniversary of the reburial of King Richard III, I have decided to write down my opinions about this controversial king.

When one thinks of Richard III, one thinks of controversy especially about how he came to be on the throne. In a matter of months after Edward IV died, Richard became the notorious Richard III. It is the belief of his contemporaries that in order to retrieve the throne Richard had to have the most heinous act imaginable performed: he ordered the murder of his nephews.

In Desmond Seward’s book Richard III: The Black Legend, Seward characterizes the way this man has been viewed throughout history:

Richard has left two popular legends. The earlier is Shakespeare’s crookback, whose element of caricature has been heightened by a theatrical tradition stretching from Colly Cibber to Laurence Olivier (though Shakespeare was nearer the  truth than some of the king’s latter day defenders). The second, later, legend is of a folk hero manque, a gallant young ruler, the supreme victim of vilification in English history. Supporters of this ‘white’ legend have produced some very entertaining literature in portraying Richard as a martyr to Tudor propaganda.

The two legends are the black legend that Richard III willfully had his nephews murdered, and the white legend that he is innocent of all crimes and that the Tudors framed him in order to promote their own dynasty. I have always been fascinated by the time known as the Wars of the Roses, especially this incident in particular. For me, Richard III is one of those controversial characters in history who  we may never really truly understand all of his story. That being said, it is my firm belief that the black legend is the most accurate. I believe that Richard has his nephews murdered.

My opinion about Richard III was not made in haste, in fact I have read quite a bit about him. My senior thesis for my Bachelor’s degree was on how Richard III’s and Henry VII’s reputations have changed overtime so I read many  biographies and histories about Richard III over the last 500 years in order to come up with my opinion on Richard. 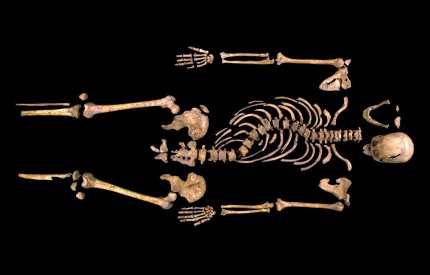 Shakespearean lore. I used to believe this and then his skeleton was discovered under the car park in Leicester. After looking at his skeleton, one would think he would be unfit to fit, but I came across a documentary that proved otherwise. “Resurrecting Richard III” by PBS was able to find a man in England who had the exact same amount of curvature in his back as Richard III. It proved that Richard could fight and that he wasn’t as Shakespeare described him. If you haven’t seen this documentary, I highly recommend that you do.

The next aspect I want to explore is his personality and his behavior. I believe that Richard was a complex man and he had to be in order to survive in the time that he lived in, the Wars of the Roses. With the examples of his father Richard duke of York and his brothers Edward IV and George Duke of Clarence, I believe that what he witnessed in his early life was what shaped him as he became king. Think about it. Richard’s father wanted to help the country by becoming the king’s Lord Protector but then decided to take the throne for himself. This did not work as well as he planned as he died at the battle of Wakefield on December 30, 1460. Since Richard III was still a young man when all of this happened, this must have affected him like it did his brothers Edward and George. Edward would fight with George and Richard by his side to become Edward IV. I believe that once Edward was able to take Henry VI into custody that he had ordered Richard III to help assist in the murder of the old king because he was the one brother who he could trust.  George would become angry with Edward and would betray him not once but twice and so Edward had to order for George to be executed allegedly in “a butt of Malmsey wine” on February 18, 1478.

It was the death of George that I believe really was the turning point for Richard. He came from a family of men who coveted the throne so much that they would fight not only their cousins but their own brothers for the crown. George was careless and allowed himself to be caught in his betrayal. If Richard wanted the throne, he knew he had to be more careful. He couldn’t betray Edward while he was still alive or he risked his own death, like George. No, Richard would have to wait until the time was right. On April 9, 1483, King Edward IV died, leaving the throne to his young son Edward V. This was to be a happy occasion for the house of York, but it was not to be. The one man in charge of their care and well being was their uncle, Richard duke of Gloucester, their Lord Protector. 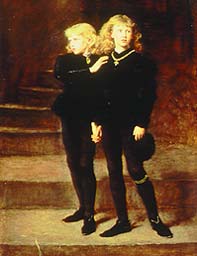 Just like his father before him, Richard was granted the right to make orders for the king, not because he was well liked, but because he fought against the Woodvilles and the Rivers for the right. He was fighting his brother’s wife’s family for the right to control the country. Richard would have Lord Rivers killed because of “treason” to protect the boy king. Edward V and his younger brother Richard duke of York were led to the Tower of London “for protection” and were never to be seen again after 1483.  Since the young king was out of the picture, I believe because Richard had the boys murdered, the only one who had the right to the throne was Richard himself. Just like he planned. To seal the deal, Richard III issued the Titulus Regius in 1484 which declared the children of Edward IV and his queen Elizabeth Woodville illegitimate because Edward had promised to marry another woman before Elizabeth.

These kinds of moves were cold and calculated. Richard had time to plan all of this out, from 1478 to 1483, 5 years to be exact. If Richard was really concerned about the kingdom, he would have raised Edward V and his brother as his own sons, allowing them to rule the country as their own. He does not and his name will be tarnished forever because of it.

However, Richard’s reign does not last as long as he hoped because on August 22, 1485, Richard is killed at the Battle of Bosworth Field. We all know that it is at Bosworth Field where Henry Tudor becomes Henry VII and the Tudor dynasty begins. Richard is hacked to death, carried on horseback like a boar (his symbol was a white boar so they were mocking him) and was buried at the Church of the Greyfriars. His death marked the end of the Plantagenets dynasty.  This was not a proper death for a king but a hated villain. I do not believe that the amount of brutality was necessary for Richard to die. He was still an ordained king, even if his methods on obtaining the throne were questionable.

Richard III is one of those kings who will continue to fascinate those who study the Plantagenets dynasty, the Tudor dynasty and the Wars of the Roses. This one man is still being hotly debated even to this day.

What are your opinions on this controversial king?