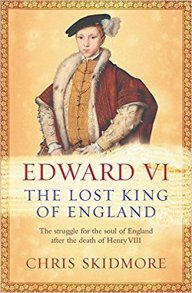 When we think of the Tudor rulers, we think of Henry VII, Henry VIII, Mary I and Elizabeth I. However, there was another king who ruled for only five years and was Henry VIII’s only legitimate male heir, Edward VI. Most people think that Edward was a mere pawn of his government officials but is that accurate? Chris Skidmore tackles that question of who was the real Edward VI in his book “Edward VI: The Lost King of England”.

We all know the story of how Henry VIII wanted a male heir and how Henry dealt with his wives, Katherine of Aragon and Anne Boleyn, when they couldn’t produce male heirs. It was Jane Seymour who was able to give birth to Henry’s heir Edward on October 12, 1537, although she died shortly after. From the beginning of his young life, Edward was coddled and his education was carefully considered. Edward was living a comfortable life of a prince, but that all changed when on January 28, 1547, Henry VIII died and at the tender age of nine. Chris Skidmore put this young king’s life into perspective:

The legacy of Edward’s reign is one of the most exciting political histories of the Tudor age, from which few appeared unscathed. His untimely death cut short a life that, forged in the remarkable political circumstance of his childhood, would have left us with a very different Tudor England than that fashioned under the female monarchies of Mary and Elizabeth (page 9)

Some of the few men who were in charge of Edward’s well-being while he was making the transition from boy to king were Edward Seymour Duke of Somerset, Edward’s maternal uncle, John Dudley Duke of Northumberland, and John Cheke, Edward’s tutor.  Edward Seymour was the Lord Protector and the older brother of the somewhat infamous Thomas Seymour. Edward Seymour and John Dudley would later come to hate each other and most of Edward’s short reign consisted of the two men fighting each other for the right to help Edward run the kingdom, as well as fight rebellions that would spring up to try and throw the country into chaos.

John Cheke, as Edward’s tutor, taught the young king about the Protestant faith that was

making a foothold in England. Most people think that Henry VIII was the one who helped bring the Protestant faith to England when he broke away from Rome. Henry VIII might of helped get the reform started, but Edward VI was the one who took the Protestant movement and was willing to make it known throughout England, even if it meant facing against his most formidable foe, his half-sister Mary who was a devout Catholic.

This was the world that King Edward VI lived in until he died on July 6, 1553 at the age of fifteen. Even after he died, he threw chaos into the succession that his father planned out by placing his cousin Lady Jane Grey on the throne instead of Mary. It did not last long but the six day reign of Lady Jane Grey was Edward’s choice and his alone. By the end of his life, Edward was becoming his own man and no one would stand in his way.

In “Edward VI: The Lost King of England”, Chris Skidmore brings the reader into this complex world of this young king both inside his court and what the laws he enacted did to the common people. Skidmore illuminates this once forgotten king whose life was cut short by tuberculosis and shows us how much of a reformer king he truly was. Edward may have been young but he was an intellectual who made up his mind just like his father. This book gives us a different view of religion and politics during this time. Edward VI will never be lost or forgotten after this book.