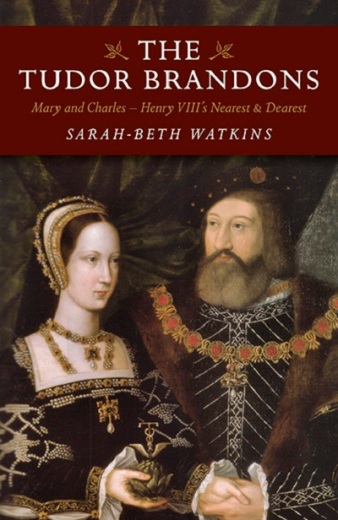 Love stories tend to be rare during the Tudor dynasty. They are often of royal women marrying men well below their station in life and then the ruling monarch throwing them in the Tower until they ended up divorcing or dying. Nothing really romantic about these stories. However, there is one story that breaks the mold of disastrous love. It is the story of Mary Tudor, the sister of King Henry VIII and the Dowager Queen of France, who married the charming knight and best friend of her brother, Charles Brandon. Their story is often told in historical fiction novels, but Sarah-Beth Watkins decided to dive deep into the lives of these two lovebirds, before and after they were married, in her book, “The Tudor Brandons: Mary and Charles- Henry VIII’s Nearest and Dearest”.

I would like to thank Sarah-Beth Watkins and Chronos Books for sending me a copy of this delightful book. The relationship between Mary and Charles has been something that has fascinated me for a while now and I always like learning new information about their lives and their family.

When it comes to studying the relationship between Mary and Charles, one would think that it would be best to start by studying Mary, since she is the Tudor princess. However, Watkins decides to start her book about these two with Charles:

As Charles Brandon lay in his cradle, his father took to the field as standard-bearer for Henry Tudor at the Battle of Bosworth, on 22 August 1485. This defining moment in history, when the Plantagenet dynasty ended and the Tudor began, was also to be a defining moment in this small child’s life. Both Charles’ father and his grandfather were soldiers in the Wars of the Roses and the events leading up to this momentous day. Coming from mercantile beginnings, the men of the Brandon family all rose to positions of importance, but Charles would rise higher than them all to become King Henry VIII’s most favoured companion, and husband to his sister, Mary Tudor. (Watkins, 1).

Watkins explores the origins of the Brandons, starting with Charles’ grandfather, who was quite an interesting figure. After reading what kind of man Charles’ grandfather was, it is kind of amazing to see how the Brandons rose to be loyal to the Tudors. Before Charles fell in love with Mary, he had a complex love life with Anne Browne and Margaret Mortimer, Anne’s rich aunt. Charles eventually married Anne after and she gave him two daughters before she died, Anne and Mary Brandon. During the time after Anne’s death and before he married Mary, Charles got into an international incident when he attempted to woo Margaret of Savoy. Charles may have looked the part of a knight, but his love life was a mess. That was until he went to France to pick up Mary Tudor, who was the Dowager Queen of France after her husband, King Louis XII, died shortly after their marriage.

The two decided to throw caution to the wind and get married to each other. They risked the wrath of Mary’s brother and huge fines, but they overcame it all and were still managed to be in Henry’s good graces. Charles and Mary were in the middle of court life during Henry’s marriage and divorce to Catherine of Aragon while they were taking care of their own family. Mary wasn’t thrilled about Anne Boleyn, but Charles kept his attitude about Henry’s mistress and future second wife to himself. Mary suffered from multiple bouts of illnesses and would die in 1533. Charles would marry again to Catherine Willoughby and have more children before he died in 1545.

The love story of Charles and Mary Brandon comes to life in Watkins book. What I love about this book is the combination of primary sources and poetry with Watkins’ easy to understand writing style. This book is an absolutely fascinating look into the lives of these two remarkable people and how their relationship helped change England. If you want a fantastic book to introduce you to the relationship between Charles and Mary Brandon, I highly recommend you read Sarah-Beth Watkins’ book, “The Tudor Brandons: Mary and Charles- Henry VIII’s Nearest and Dearest”.