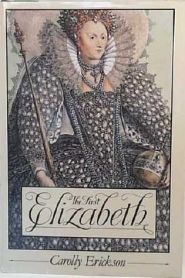 The story of Elizabeth I is full of twists and turns. From the moment she was born, she had to fight to survive. Through all that she went through, Elizabeth found the strength and courage to become the legendary queen to help England to enter into a golden age of peace and prosperity. This, however, is just one side of Elizabeth. The other side of Elizabeth’s personality, her anger and her interactions with her councilors, is explored thoroughly in Carolly Erickson’s book “The First Elizabeth”.

Carolly Erickson explains this other side of Elizabeth a bit further:

But if Elizabeth’s political and intellectual skills served her well, though hardly infallibly, in dealing with her councilors she relied on her volatile, imperious temperament and on her inbred capacity for duplicity and deceit to keep them at bay. She was dangerously unpredictable in her moods. She blustered one minute and beguiled the next. Now coaxing and cajoling, now spitting out ringing oaths and insults, she kept her advisers off balance and perpetually astonished them by the range and mutability of her passions. Beyond this, they came to know that, with Elizabeth, nothing was ever what it seemed. Beneath her surface emotions were layer upon calculating layer of secondary reactions, ploys and schemes. She took pleasure in laying traps for her unwary ministers and ensnaring them later with their own words. Even the wittiest of them were sometimes left tongue-tied and flat footed in her presence, while all of them, however fleetingly, were on occasion dazzled by her youthful, radiant femininity and sexual magnetism.(Erickson, 173).

Erickson begins her book with the birth of Elizabeth and her relationship with her father Henry VIII. With the death of the king, Elizabeth had to adapt to the rules of her step brother and sister, Edward VI and Mary. It’s really Mary’s reign where Erickson focuses her attention for the first part of the book. To her, Elizabeth is more timid and scared whereas Mary comes off strong. It’s a different look at these two sisters and their relationship.

With Mary’s death, the twenty-five year old Elizabeth is declared Queen of England. The people of England were relatively hesitant about  this newcomer since they did not know much about her. Elizabeth worked hard to create an image of a good and benevolent queen for her people while hiding her temper that she was notorious for. Those who were closest to Elizabeth would often feel her anger first hand. Erickson also shows how even though there was a facade of peace in England during Elizabeth’s reign, there were those who wanted Elizabeth dead. Elizabeth fought both internal and external enemies in order to survive. It was her strength and her determination that made her a legend.

Erickson’s book may be a biography but it reads like a historical fiction novel. There were times when Erickson would mention famous passages or rumors and I was wishing that she had included the actual text in the book. Another thing that Erickson did that I bothered me a bit was that she made Elizabeth a bit darker than she is normally portrayed. When it came to the death of Mary Queen of Scots, Erickson really did not mention how much of a struggle it was for Elizabeth to sign the death warrant against Mary.

Overall, I think that “The First Elizabeth” by Carolly Erickson was an interesting read. There were some facts and rumors in this book that I was not aware of and her portrayal of Elizabeth was memorable. Elizabeth was prone to angry tirades but ultimately she had her people’s best interest in mind. I am glad that I read Carolly Erickson’s book because it did show a different side of this remarkable queen. I would recommend this book for anyone who is looking for a different perspective on Elizabeth I.