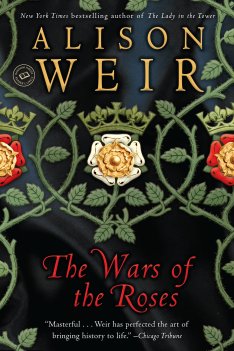 The Wars of the Roses was a series of wars from 1455 until 1487 for the throne of England. It is traditionally taught that it was between the houses of York and Lancaster, yet there were a lot more players involved than these two families. In fact the conflict started much earlier with the children of Edward III and Philippa of Hainault. The Lancasters were the descendants of John of Gaunt and his wife Blanche of Lancaster while the Yorks were descendants of Edmund of Langley Duke of York. This was a series over the question of who had the strongest claim to the throne. This question and the series of wars that would try to answer it is explored in depth in Alison Weir’s book “The Wars of the Roses”.

Alison Weir explains the struggle of studying this time period and what she is trying to accomplish in her book:

Sources for this period are meagre and often ambiguous, yet much research has been done over the last hundred years to illuminate a little for us what is often described as the twilight world of the fifteenth century. Many misconceptions have been swept away, yet even so the dynastic conflict still confuses many. My aim has been throughout to eliminate that confusion and try to present the story in chronological sequence, clarifying the problems of the royal succession in an age in which no certain rules of inheritance applied. I have also tried to bring the world of the fifteenth century to life by introducing as much contemporary detail as space permits, in order to make the subject relevant to any read, academic or otherwise. Chiefly, however, I have tried to re-tell an astonishing and often grim story of power struggles in high places that involved some of the most charismatic figures in English history. (Weir, xix).

Weir begins her book by explaining  what England in the fifteenth century was like before diving into the history of Edward III and the Plantagenets in the late 1300s. This may seem a little complex since there were many sons of Edward III, but the throne first went to Richard II, but when he was forced to abdicate, the throne went to Henry of Bolingbroke, who became Henry IV. He was the son of John of Gaunt and Blanche of Lancaster. John of Gaunt and his third wife Katherine Swynford had children who would become known as the Beauforts. They would become important later on.

Henry IV’s son would become Henry V who was married to Katherine of Valois. When Henry V died, their son Henry VI became king; he was a baby. His mother would remarry a Welsh man named Owen Tudor and they would have a few children, including Edmund and Jasper Tudor. Henry VI would marry Margaret of Anjou. Richard Earl of Cambridge, the son of Edmund of Langley, would have a son with his wife Anne Mortimer named Richard Plantagenet Duke of York. He would marry the “Rose of Raby” Cecily Neville and they would be the parents of Edward IV, George Duke of Clarence and Richard Duke of Gloucester, later Richard III.

This all may seem a bit complex, but it is important to understand how all of the players in the Wars of the Roses were connected. Henry VI was a weak king who was known for his madness and so someone had to lead the government. Richard Duke of York believed that he should have been Lord Protector, however Margaret of Anjou and her party at court had other ideas. The beginning of this conflict was a battle between court factions, but eventually it escalated rather quickly into a full on rebellion by Richard Duke of York. This was now a battle between the Yorks and the Lancasters. When Richard Duke of York died at the Battle of Wakefield on December 30, 1460, his son Edward took on the Yorkist cause and would become king after the battle of Towton on March 29, 1461, the bloodiest battle on English soil. After Towton, it was a battle between Edward IV and those who supported Henry VI, until 1471 when Edward IV ultimately won, thus ending the conflict between the Yorks and the Lancasters.

One thought on “Book Review: “The Wars of the Roses” by Alison Weir”