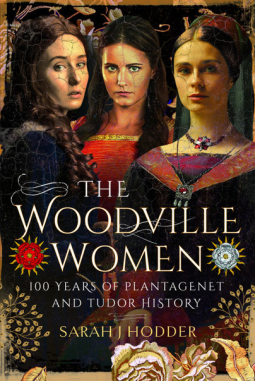 Three women in one family who shared the same first name saw England change over a tumultuous century. They saw the end of the Plantagenet dynasty and the rise of the Tudors while on the sidelines of great battles. Through heartaches and triumphs, the women of the Woodville family became princesses and queens that would transform the political landscape of England forever. These three women, Elizabeth Woodville, Elizabeth of York, and Elizabeth Grey, were incredible examples of what it meant to be medieval royal women. They are featured in Sarah J. Hodder’s latest book, “The Woodville Women.”

I want to thank Pen and Sword Books and NetGalley for sending me a copy of this book. I have read other books by Sarah J. Hodder about women from the Woodville family, so when I heard about this title, I wanted to see what new information she would share with her audience.

We begin our adventure into the Woodville family by exploring the matriarch of this rather extraordinary family, Jacquetta of Luxembourg, the future wife of Richard Woodville. For a woman of Jacquetta’s status to marry a man well below her rank was unheard of in medieval Europe, but their union would change history during the tumultuous time known as the Wars of the Roses. Their daughter, Elizabeth Woodville, would marry a Lancastrian soldier named Sir John Grey of Grosby, but when John died, she caught the eye of the young Yorkist king, Edward IV.

During King Edward IV’s reign, Elizabeth Woodville, now queen of England, showed her true strength. As a mother to a large family, including the infamous Princes of the Tower, and her eldest child Elizabeth of York, Elizabeth Woodville fought for her children’s rights, even after her beloved husband’s death. Elizabeth of York would follow in her mother’s footsteps and become Queen of England when she married the victor of the battle of Bosworth Field, Henry Tudor, the patriarch of the Tudor dynasty.

The woman who proved the most fascinating character in this particular book for me was Elizabeth Grey, the daughter of Thomas Grey and Cecily Bonville. Elizabeth Grey would marry Gerald Fitzgerald, 9th Earl of Kildare, who she met at the Field of Cloth of Gold. They would live in Ireland and have many children together, but things were not smooth sailing as Kildare’s rivalries would lead to rebellions in Ireland and land him in the Tower of London a few times. Although Kildare had a rocky relationship with King Henry VIII, Elizabeth Grey was cordial with her royal relation.

One thought on “Book Review: “The Woodville Women” by Sarah J. Hodder”