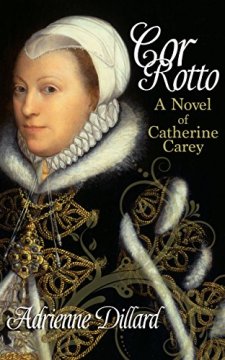 The Boleyn family is one of the most notable families during the reign of the Tudors. When one thinks about this family, people like Anne Boleyn, Thomas Boleyn, and George Boleyn come to mind. However, another Boleyn and her family story have been emerging from the shadows of history in recent years. That is the story of Mary Boleyn, a mistress of King Henry VIII. Mary Boleyn had a daughter named Catherine Carey, who married Sir Francis Knollys and was the mother of 14 children, including Lettice Knollys. Since Catherine Carey was a direct relation to the Tudors, what might have her life have been like? Adrienne Dillard wanted to give readers a possible view of Catherine Carey’s life in her book, “Cor Rotto: A Novel of Catherine Carey”.

Adrienne Dillard chooses to start her fabulous novel in a unique dream sequence:

The dream was always the same. My feet were filthy. To most children my age this would be expected, something they dealt with every day of their lives as they toiled alongside their parents in the field, usually too poor to afford proper footwear. But to me it spelled disaster. I knew that soon my grandfather would be home and would be very displeased. Instead of swinging me in the air, plying me with affection as he usually did when he returned from Court, he would stare at my dirt-caked toes and say disdainfully, “You are a Boleyn and you should know your place. No Boleyn will ever live like a beggar child, I have worked hard my whole life to make sure of it.” With those scornful words, my heart would be cut in two. I knew I had to find my brother Henry, get back to the house and clean up before our grandfather arrived….I burst through the apple trees into a clearing and saw the scaffold before me. “No!” I shrieked, feet rooted to the ground, I stared on in horror as the sword sliced the head from my aunt’s swan-like neck. The executioner raised her severed head into the air by its long chestnut locks. Anne’s eyes were wide in shock, her lips still moving, the blood formed a river in the dirt. The last thing I remembered before my world turned black was my own scream. (Dillard, 2).

Catherine’s life was full of heartache, in fact, Princess Elizabeth was the one who signed a letter to Catherine with Cor Rotto, which is Latin for “broken-hearted”. With as many deaths that Catherine experienced in her lifetime, including the death of two of her children, she also found a lot of love. Although her marriage to Sir Francis Knollys was an arranged marriage, like so many were back in the time of the Tudors, Catherine and Francis fell in love with one another. It was that love that helped Catherine, Francis, and their family navigates the ever-changing political and religious environment of the royal court.

In this book, Catherine is portrayed as the illegitimate daughter of King Henry VIII. This has been a rumor ever since she was born since her mother was the mistress of Henry VIII, yet it has never been proven. It adds an interesting twist to her story since she was one of the ladies who served Elizabeth I, who if these rumors were true, was her half-sister. Catherine tends to be someone who enjoyed a normal, drama free life, and so she never tells anyone outside her immediate family the truth. Another unique aspect of this book is how Adrienne Dillard portrays when Catherine and Francis took part of their family to Germany during the reign of Mary I, to escape religious persecution. Not much is known about this time so it was rather interesting to read how different their lives could have been like while on the run.

Adrienne Dillard’s book is beautifully written and tells the story of such a remarkable woman. She stayed on the sideline and was able to have a good relationship with every Tudor monarch, which was actually quite a rarity. Dillard was able to portray the love that Catherine had as a mother and wife in a simple and humble way that it felt like Catherine could be a friend. This was my first time reading a book by Adrienne Dillard and I absolutely loved it. She was able to bring the life of a royal and a mother of 14 to life in such a respectful and dignified way. She made you believe that Catherine Carey could have been the illegitimate daughter of King Henry VIII. After reading this book, I want to learn even more about Catherine Carey and her extraordinary family.

If you want a gorgeous book about a wonderful woman who lived during the time of the Tudors, I highly recommend you read “Cor Rotto: A Novel of Catherine Carey” by Adrienne Dillard.