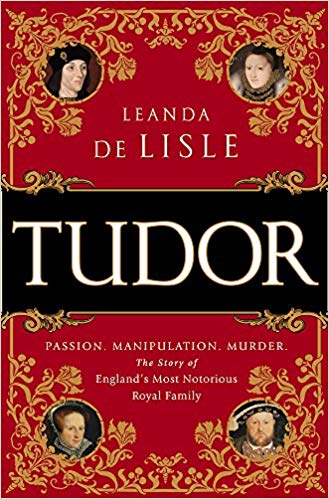 Every family has their own stories. Stories of how they became a family, how they fought hard to get where they are today. Stories filled with love, drama, and endurance. When it comes to royal families, their stories tend to be broadcast to the masses, and none more so than the Tudors, who have captured the imagination of history lovers for generations. The Tudor’s story is often told in parts, focusing on individual people like Henry VIII or Elizabeth I. The Tudor story is fascinating told in parts, but as a whole, one sees how hard they worked to become a dynasty that will be remembered for centuries after their deaths. It is time for the story of this extraordinary family to be told as a whole and Leanda de Lisle does so in her book, “Tudor”.

The Tudors and their story often starts in books with the Battle of Bosworth Field in 1485, but that does a disservice to the humble beginnings of Owen Tudor and how they struggled to survive during the Wars of the Roses. It is their origin story that the Tudors used to their advantage, as de Lisle describes in her introduction:

The Tudors believed they were building on the past to create something different- and better- even if they differed on how. The struggle of Henry VII and his heirs to secure the line of succession, and the hopes, loves and losses of the claimants- which dominated and shaped the history of the Tudor family and their times- are the focus of this book. The universal appeal of the Tudors also lies in the family stories: of a mother’s love for her son, of the husband who kills his wives, of siblings who betray one another, of reckless love affairs, of rival cousins, of an old spinster whose heirs hope to hurry her to her end. (de Lisle, 4).

De Lisle begins her book with the story of Owen Tudor and the Welsh Tudors. It is a story of an unlikely love between a Welsh man who served in the house of the mother of the King of England. However, their story is a bit more complex. Owen Tudor descended from those who were involved in a Welsh rebellion against Henry IV, the first Lancastrian king, he married the wife and mother of two other Lancastrian kings, and his sons were the half-brothers of a Lancastrian King, Henry VI. Talk about a twist of faith. To top it all off, his only grandson, Henry Tudor, was the only child of Margaret Beaufort, who was married four different times and did everything in her power to protect her son. It all culminated in one battle at Bosworth Field where the Tudors go from nobodies to a royal dynasty.

It is this thin line of royal blood that the Tudors cling to as a lifeline to hold onto their throne. Starting with Henry VII, who fought against usurpers and rebels to hold onto the crown that he won on the battlefield. Henry believed in the importance of his family and so he chooses marriages for his children that would benefit the family as a whole. What de Lisle does well is she gives each child of Henry VII the respect that they deserve; she does not just focus on Henry VIII but gives attention to Arthur, Mary, and Margaret Tudor and their children. This is so important as it gives the reader a broader sense of how far the Tudor family ties went. Sure, we all know the stories of Henry VIII, his wives, and his children, but the Tudor story is much deeper than just the family in England. It is a story full of European players all vying for the crown of England.

Leanda de Lisle is able to masterfully tell the story of the Tudors, which has been discussed for centuries and breathe new life into this complex family drama. De Lisle balances meticulous research with an easily accessible writing style in this book that fans of the Tudor dynasty, both scholars and casual readers, will appreciate. This is a book that you will not want to put down. I would recommend this book, “Tudor” by Leanda de Lisle, to anyone who is enchanted with the story of the Tudors and their legacy on England. “Tudor” is an absolute triumph and a delight to read over and over again.