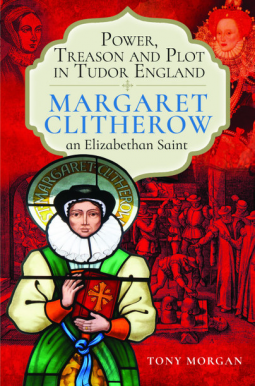 The Tudor dynasty was a time of significant political change, but it was also a time of tremendous religious change. Each Tudor monarch had a different view on the divide between Catholics and Protestants. Although we have an idea of what it might have been like during the reign of Mary I, the way Elizabeth I tackled the issue of religion during her reign. One story of how Catholics were treated in the so-called “Golden Age” of Elizabethan England is the story of Margaret Clitherow. She helped hide a couple of Catholic priests and ended up suffering for her actions by being crushed to death. Tony Morgan tells her story and how she became a Catholic martyr in his book, “Power, Treason, and Plot in Tudor England: Margaret Clitherow, an Elizabethan Saint.”

Thank you, Pen and Sword Books and Casemate, for sending me a copy of this book. I have heard the name Margaret Clitherow mentioned a few times in books about Elizabeth I, but I found out about her tragic tale.

With each monarch came dramatic changes, and by the time Elizabeth was on the throne, Protestants were safe, and Catholics were on the run. Morgan breaks each chapter into sections: how England was changing, how York was dealing with the changes, and how the changes in York affected Margaret Clitherow and her family. It is a great way to give the audience an understanding of why these changes involved a family of business owners like the Middletons and her husband, John Clitherow, a butcher. Margaret was raised to be a Protestant, but in her heart, she would always be a Catholic recusant.

Margaret Clitherow was no stranger to prison, as she had landed behind bars several times before her last case. In it, she was convicted of hiding a couple of Catholic priests, which was against the act of 1585 known as the “Act Against Jesuits, Seminary Priests and Such Other Like Disobedient Persons.” When brought to court, Margaret refused to plead either guilty or not guilty, creating a dilemma; the court ultimately decided she was guilty and sentenced her to death by being crushed by large rocks. What we know of the trial and execution is due to the book by Father John Mush called “A True Report of the Life and Martyrdom of Mrs. Margaret Clitherow.”

I found some parts of the book a tad dry, but that was because it dealt with religious politics and new laws. When it came to the actual story of Margaret Clitherow and her family drama, Morgan did an excellent job of introducing his audience to a new figure who fought for what she believed was right until the bitter end. If you want a book that teaches you about the Catholic resistance during the Elizabethan era and wants to know about Margaret Clitherow, “Power, Treason, and Plot in Tudor England: Margaret Clitherow, an Elizabethan Saint” by Tony Morgan should be on your list of books to read.

One thought on “Book Review: “Power, Treason, and Plot in Tudor England: Margaret Clitherow, an Elizabethan Saint” by Tony Morgan”